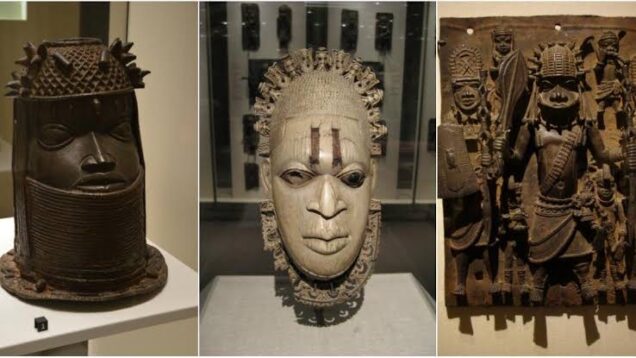 The National Commission for Museums and Monuments (NCMM) on Friday said no fewer than 1,500 Nigerian artefacts taken away from the country will be retrieved from across the world in 2022.

Prof. Abba Tijani, Director-General, NCMM disclosed this to the News Agency of Nigeria (NAN) during a telephone interview.

Tijani said that these were part of the over 5,000 artefacts carted away from different locations in Nigeria decades ago.

The director-general said that the artefacts would be retrieved from Germany, Australia, New Zealand, United Kingdom and other individual museums across the globe.

He noted that agreements had been reached for the return of the Benin bronzes in the British Museum of Anthropology and Archeology at the University of Cambridge, United Kingdom, as they hold the second largest collection of such artefacts.

According to him, the largest number to be retrieved in 2022 will be coming from Germany with 1,030 Nigerian artefacts.

He said the Oxford University, England was also willing to return the Benin bronzes in their collection.

” We have not been able to retrieve much because the negotiation and agreement started this year; the artefacts are expected to start coming in from 2022.

” We have written formally to other museums with our artefacts, likewise Australia embassy have organised a zoom meeting, to hold in January where we are going to meet with all the museum directors in Australia to discuss the terms of return.

” Some museums in the United States of America, individual museums in other countries have already contacted us saying that they are ready to return all the Benin bronzes in their collection, so it is left to us to go and collect them,” he said.

Tijani said that the commission was working tirelessly on preparing conducive environment for the artefacts to be kept, which would be of international standard.

He said that upon return of the artefacts, the NCMM would  organise series of exhibitions where they would be displayed for the general public to have a glimpse of them.

The director-general explained that this was neccesssary to correct most Nigerians’ misconception that these artefacts were not genuinely returned.

He said that the Federal Government would decide where the retrieved artefacts would  be kept after the exhibition.

” For 2021, we have been able to retrieve two artefacts from the United Kingdom, one from Cambridge University and the other from University of Aberdeen Museum.

” Also at the United States Metropolitan Museum of Arts, we retrieved three Benin artefacts and we have agreed for the return of all the Benin bronzes in the whole of the historian museum in the United States of America.

“For the artefacts retrieved from Cambridge and Aberdeen, Mr President has authorised that they go back to Benin palace from where it was initially carted away even though the artefacts are not physically here yet, we are still processing the export permit.

” The Oba of Benin is happy about this and that is the reason he is proposing a royal museum; NCMM also has a national museum in Benin which we are planning to expand to be able to accommodate these artefacts when they finally arrive.

” We will ensure wherever the artefacts are kept are of international standard, just like where they are coming from, because they are precious materials that need to be properly preserved,” he said.