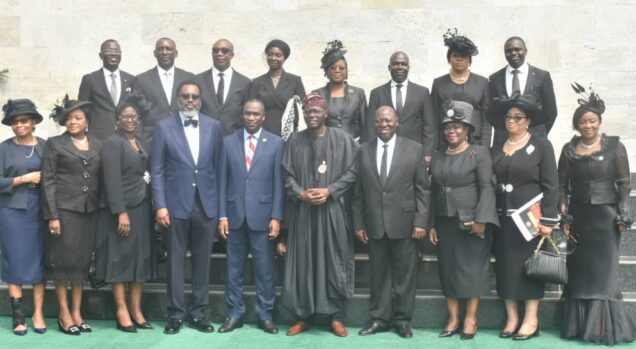 Sanwo-Olu with the new judges

Lagos State Governor, Babajide Sanwo-Olu on Friday swears in 14 new judges, bringing the number of Judges in the State Judiciary to 70.

The new benchers consist of nine female and five male.

Governor Sanwo-Olu told the new Judges that all eyes would be on them to dispense justice speedily, yet fairly and impartially, while also living and acting above board in all circumstances.

“In your hands lie great power: the power to punish wrongdoers and free the innocent, the power to send a strong message to society about the primacy of the rule of law, and to contribute to the growing body of jurisprudence in the country.

“There is a reason why the Courts are described as the last hope of the common man. A lot of the sense of frustration and cynicism that Nigerians today feel about the country is related to their experiences with the administration and dispensation of Justice — an area in which the Judiciary is a central player.

“Judges who take their work seriously can do a lot to rebuild the confidence of citizens in the systems and institutions of our nation. A properly functioning judicial system will also go a long way in nurturing an environment that enables business and investment, and by extension, economic growth, and prosperity. When society prospers, there is less room for poverty to drive people to crime and criminality,” he stated

Governor Sanwo-Olu pointed out that his administration had commenced the full digitization of courts to ensure speedy administration of justice and charged the new Judges to acquaint themselves of the ongoing reforms in the at the State and federal level.

He said “On our part, we remain committed to supporting the Judiciary to fully discharge its constitutional functions and responsibilities.Overall, we are determined to keep responding to changing times in a timely fashion, in keeping with our vision of making Lagos a truly 21st century economy in all ramifications”

The Governor thanked the National Judicial Service Commission for adding to the list of twelve prospective Judges earlier sent.

Earlier while reading the citation of the new Judges, the Attorney-General and Commissioner for Justice, Mr Moyosore Onigbanjo said the appointment of the new Judges was necessitated by the retirement of some Judges in the course of the year.

In his remarks, the Chief Judge of the State, Justice Kazeem Alogba advised the new benchers whom he said were chosen based on merit to operate with the fear of God.

Justice Alogba also advised the families of the new Judges to leave them to work and to continue to pray for them so that they would not falter.

Thanking the State government for the confidence reposed in them, Justice Olubusola Adeyemi-Okunuga promised that they would make the State Judiciary proud by discharging their duty without fear, favour, ill-wind or affection.

The number of Judges so far sworn in by the Sanwo-Olu administration is now twenty-four.