Why I didn’t change furniture in my office – Johnson Babatunde 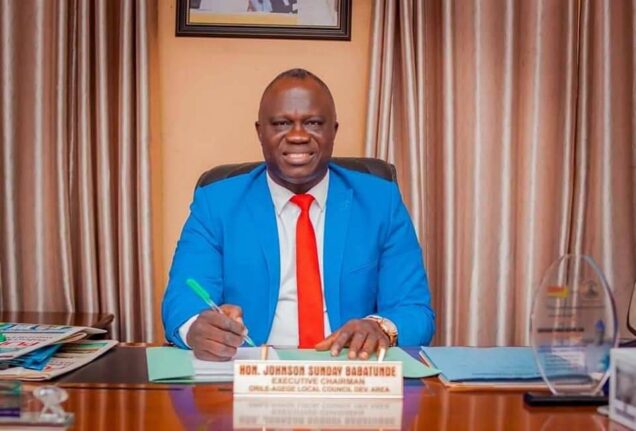 Mr Johnson Babatunde, the Chairman, Orile-Agege Local Council Development Area (LCDA), Lagos State, said determination to impact lives did not allow him to change furniture and other items in his office.

Babatunde told the News Agency of Nigeria (NAN) in Lagos on Friday that his administration believed in actions than words.

“My passion for the welfare of the people did not allow me to renovate my office nor change furniture and other items left by my predecessor.

“When my predecessor came in 2021, he still met all the things left in the office of the chairman. He still met the window blind, chairs and other things.

“That is to tell how committed we are to the people of Orile-Agege LCDA. God has been giving us support and guidance.

“We decided to keep quiet. What is most important is impacting lives,” the council boss said.

According to him, residents of the LCDA can attest to infrastructure renewal by his administration.

Babatunde, who praised the residents, the council workers and the media for support, said that over 90 per cent of the electorate voted for him for a second term in July.

The chairman said that construction of health centres in four of the six wards of the LCDA was about 90 per cent completed and efforts had been concluded to fully equip them for the benefit of the masses.

Babatunde said that he was looking for a location in Ward B and Ward C, yet to be captured in the healthcare programme.

“I am also ready to buy in order to build health centres in Ward B and C.

“We will improve in our internally-generated revenue to do these and much more. All our health centres should have drugs,” he said.

According to him, the council has paid 70 per cent of contract sums for rebuilding of the council’s legislative building, event centres, drainages and other ongoing projects.

Babatunde said that the ongoing renovation of the LCDA secretariat was about 60 per cent completed, adding that the project would soon be delivered as the contractor had been well mobilised.

He said that the LCDA was also working on Momodu Street to address gridlock at the Iyana-Ipaja area.

He told NAN that owners and tenants of houses affected by the project had been compensated.

The council boss, who urged Nigerians to be positive-minded in 2022, expressed optimism that the nation would have victory over its challenges.

Babatunde said that the council would strengthen vocational training and empowerment programmes for unemployed youths and women to create wealth.

“Our empowerment programmes will be strengthened and we are not going to be partial about it.

Babatunde said that his administration had also distributed 20 buses to some unemployed youths as a form of empowerment.

“In fact, we want to surpass our efforts during our first term in office. My vision is to renew, rebuild and restore the glory of the LCDA.

“All that we are doing is to impact the people that put us here so that posterity will judge us well.

“We want to set a standard for those coming behind us,” he added.