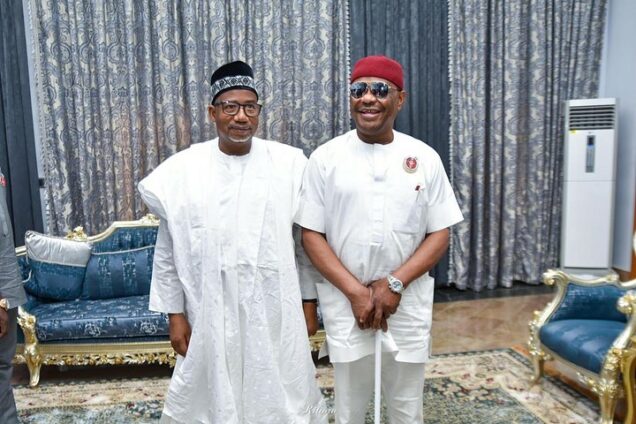 Rivers Governor, Nyesom Wike, has said his Bauchi State counterpart, Bala Mohammed, has all it takes to contest for the Nigerian presidency in the 2023 presidential election.

Wike who led a delegation from Rivers to Bauchi for the celebration of the New Year spoke when he was asked to react to calls by some groups that his host, Governor Mohammed should contest for the 2023 presidency.

Lawal Muazu Bauchi, new media aide to Governor Mohammed in a statement issued on the visit quoted Wike as endorsing the calls.

“On the calls made by individuals, groups and organizations on Governor Bala to run for presidency in 2023 election, Wike described it timely adding that the Bauchi Governor has all it takes,” Muazu said in the statement.

Wike said the PDP is in best position to leD Nigeria out of current problem of insecurity and Mohamed has the experience to do it.

“This is an opportunity to save Nigeria. We Christians know that when the Israelites were in problems, God had to bring Moses to lead them. Nigeria is in serious problems now and it is the PDP that will lead Nigeria out of these problems. So, we must take that responsibility. I’ll prefer that if God makes it that the ticket falls on him (Bala Mohammed), it means our chances are very, very bright.

“My brother, Bala, has gathered a lot of experiences. He was a director in the ministry; he became a Senator, then a minister and now a governor. And with these alone, he is qualified to be president. Then, you’ll also look at what he is doing in Bauchi; look at his pedigree, as a first time governor. I was here to flag off projects, many of my colleagues were also here to do the same, how many first time governors do you see doing that?

“So, the call for him to become President is not misplaced at all. Bala is someone who is qualified to run for President of this country. He is overqualified. In any ramification you want to look at it from, his relationship with people is second to none, so people calling on him to run for President have seen the qualities in him.”

Governor Wike on arrival paid a courtesy visit to His Royal Highness, the Emir of Bauchi, Dr Rilwanu Sulaimanu Adamu where the Emir conferred him with a traditional tittle of Jagoran Bauchi.

On his part, the Emir of Bauchi, Dr Rilwanu Sulaimanu Adamu said Governor Wike’s visit will further strengthen his relationship with Governor Bala, Bauchi Emirate and the cordial relationship between Rivers and Bauchi states.”