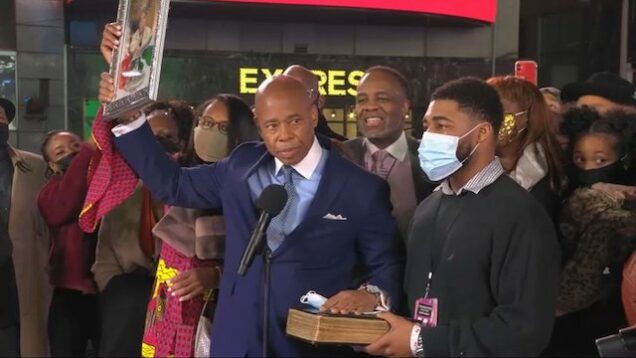 Eric Adams has been sworn in as New York City’s 110th mayor, taking over from fellow Democrat, Bill de Blasio.

Adams was sworn into office in a Times Square ceremony shortly after the nation’s largest city rang in the new year Saturday.

Adams, 61, faces the immense challenge of pulling the city out of the pandemic, taking office as the city is grappling with record numbers of COVID-19 cases driven by the omicron variant.

As confetti continued to drift across Times Square, Adams recited his oath of office.

Associate Justice Sylvia O. Hinds-Radix of the state Supreme Court’s appellate division swore Adams in as he placed one hand on a family Bible and his other held a photograph of his mother, Dorothy, who died in 2020.

He made no remarks nor took questions from reporters, but appeared on “Dick Clark’s New Year’s Rockin’ Eve with Ryan Seacrest” shortly after being sworn in.

He told Seacrest he had a few parties to attend but that he would “be up early in the morning, working for the city of New York.”

He had earlier appeared briefly on the main stage to affirm the city’s resiliency.

“Even in the midst of COVID, in the midst of everything that we’re going through, this is a country where hope and opportunities is always, ever present,” he said earlier in the night.

“It’s just great when New York shows the entire country of how we come back,” he said.

“We showed the entire globe what we’re made of. We’re unbelievable. This is an unbelievable city and, trust me, we’re ready for a major comeback because this is New York.”

Adams is a former New York City police captain and Brooklyn borough president who has struck a more business-friendly, moderate stance than his predecessor but describes himself as a practical and progressive mayor who will “get stuff done.”

Adams said this week that he plans to keep in place many of the policies of outgoing Mayor Bill de Blasio, including vaccine mandates that are among the strictest in the nation.