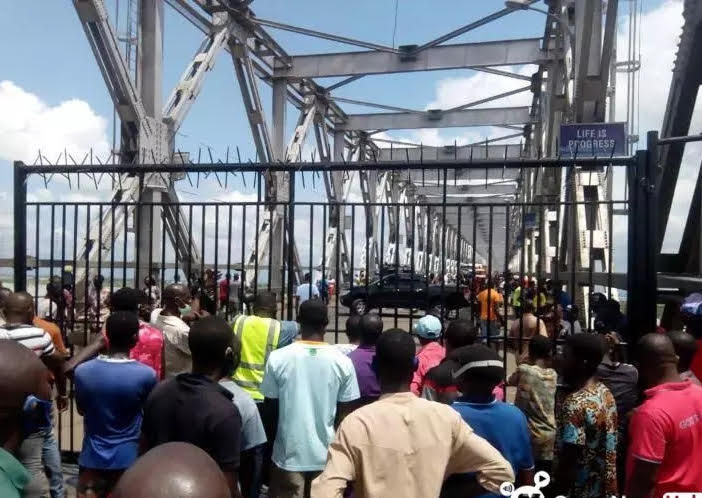 Delta State Sector Command of the Federal Road Safety Corps (FRSC) has blamed impatient motorists for the gridlock at the Asaba end of Niger bridge.

The Sector Commander, Mr Ibrahim Abubakar, gave the advice on Saturday during the Operation Zero Tolerance on Road Crashes at Yuletide, in Asaba.

Abubakar said that the advice had become necessary as motorists were always in a hurry, during festive seasons, to arrive at their destinations without being conscious of road safety measures.

He said that the corps organised a special patrol tagged, ‘Operations Zero Crash’, with the aim of achieving little or no road accidents.

“There is a very high volume of vehicular movement towards Asaba/Onitsha bridge this period.

“Also, most motorists are impatient as everyone wants to enter the bridge at the same time; that is why there is gridlock at the Asaba end of the bridge.

“We already mapped out strategies and plans. We are collaborating with other security agencies and the state government to ease the traffic on the bridge.

“The FRSC implores motorists to exercise patience, cooperate with officials and adhere strictly to traffic rules and regulations to avoid carnage on the roads,” he said.

The sector commander expressed disatisfaction that some escort vehicles and commercial motorcyclists drove against traffic.

“We try as much as possible to discourage them on the use of one way, it is not right for anyone to beat traffic.

“We are not going to condone anyone using one way. Definitely, when we see such escort vehicles, we turn them back.

“Another problem is that this okada riders are causing road traffic crashes with their one-way and dangerous driving.

“You need to see the way they face oncoming vehicles, it is very dangerous.

“They should be patient and observe road traffic rules. They should think about their safety first because only the living celebrates.

“We will enforce traffic laws on these motorcyclists so that they can do the right thing,” the sector commander said.

He said that the sector command would organise sensitisation programmes for commercial motorcyclists to educate them on the dangers of driving against traffic.