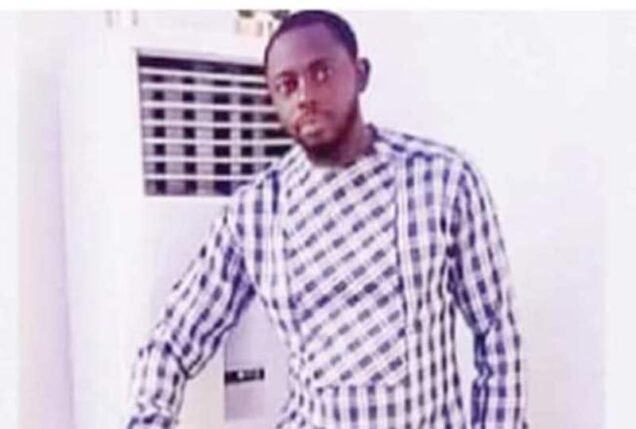 Two teenagers simply identified as Farouk, 15 and Jamiu,17 have been arrested over the murder of Pastor Babatunde Dada of Festac Parish of Redeemed Christian Church of God.

Dada was killed inside the RCCG Chapel of Resurrection on 13 Road, 6th Avenue, FESTAC Town on Thursday, December 2.

A friend of the slain pastor, Fred Enemigin, who is the founder, Highflyers International, Lagos, said Dada was stabbed multiple times.

“Two boys had come to church last Sunday and they responded to the altar call by giving their lives to Christ. After church service, they waited to see the head pastor and told him that they were stranded without any place to stay,”he wrote on Facebook.

“On compassionate grounds, the pastor allowed them to stay somewhere within the church premises pending when they would be resettled.

“Pastor Tunde Dada, who had for almost a decade been the accountant of RCCG Chapel of Resurrection Parish, was assigned to provide needed welfare for the boys until their matter would be sorted.

“On the fateful Thursday, Tunde was seated in his office and the boys targeting that they were alone on the church premises with him, entered his office and attacked him with knives and other sharp weapons. He was stabbed multiple times and places until they had him killed right there on the spot.

A family member, Abolarinwa Olatunbosun, also said Dada was killed after withdrawing money from a bank.

“The pastor went to a bank to withdraw some money and went to rest on the first floor of the church. Two persons said to be new converts went to meet him upstairs, broke his head, and killed him.

“The matter was reported to the police and one of the suspects, who ran to Ilorin, has been arrested.”

But while parading the teenagers before journalists one new year even, Lagos Commissioner of Police, Hakeem Odumosu said the suspects who introduced themselves to Dada as musicians stabbed him to death to steal his valuable.

He said after killing the Dada, the Odumosu said the suspects ran away, but the police eventually suceeded in arresting them in their hideouts in Ilorin, Kwara State, and Festac area.

Odumosu said Farouk and Jamiu confessed that they killed Dada with a bottle and a stick.

The CP aid, “The duo of Farouk, 15 and Jamiu, stabbed and killed one Babatunde Dada, 46, inside a church where he worshipped. The deceased/victim, until his death, was a pastor in the Redeemed Christian Church of God, Festac.

“The suspects, after committing the murderous act, absconded to unknown places. However, following intensive and discreet investigation, the two culprits were arrested in their hideouts. The suspects during interrogation confessed to have killed the victim with a bottle and a stick. The exhibits used in perpetuating the dastardly act were recovered.”