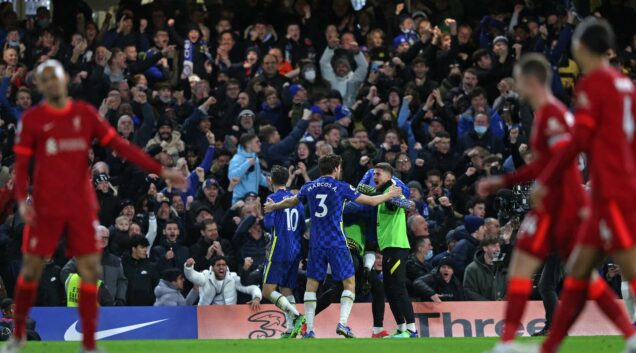 Pulisic equalised for Chelsea against Liverpool

Chelsea came from two goals behind to hold Liverpool to a 2-2 draw at Stamford Bridge on Sunday in an explosive encounter.

But Manchester City profited from the draw with a 10-point lead at the top of premier league.

The visitors opened scoring on nine minutes through Sadio Mane.

A mistake from the defence gifted a chance to a lurking Mane, who kept his cool and rolled the ball into the net from close range.

Matters got worse for Chelsea as Liverpool doubled their lead on 26 minutes from a Mohamed Salah’s brilliant goal.

Trent Alexander-Arnold managed to prod the ball to Salah after a melee inside the box, and he needed no second invitation to slot the ball into the right side of the goal.

Mateo Kovacic scored a great goal for Chelsea on 42 minutes to reduce the tally,

It was a screamer of a goal. The ball had fallen to Kovacic on the edge of the box after several rebounds and he did not hesitate to rifle it off the post into the top right corner.

Christian Pulisic equalised for Chelsea on first half added time.

N’Golo Kante had displayed great vision and sent a pass to Pulisic, who showed brilliant composure inside the box to bury the ball into the top right corner.

The second half produced no goal. Liverpool are now third on the table behind City and Chelsea. Liverpool will overtake Chelsea in second place if they with their outstanding match.