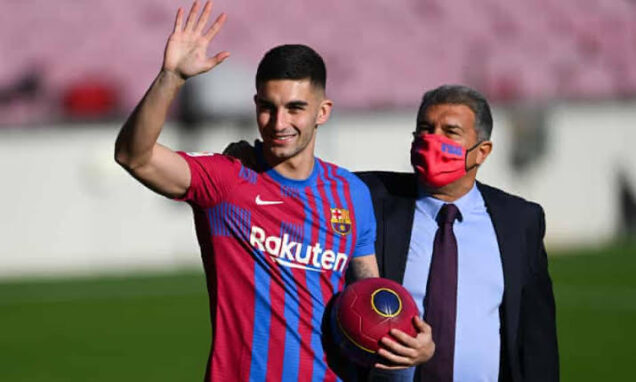 Barcelona president Joan Laporta has claimed the club’s signing of Ferran Torres proves they are once again a “leader” in the transfer market.

The club has been a shadow of itself over the past two seasons underperforming on the pitch and rocked with serious financial crisis.

Currently, the club faces certain challenges registering Torres as the clubs wage budgets is not balanced.

Despite this, Laporta insisted that the transfer was good news for the club.

“The technical department are working hard to built a great team. Everything is possible if you do things right,” he said at the unveiling of Barça’s newest signing.

“And we are doing that, so I am sure it will go well. We are back, the proof is Ferran.

“This shows that Barça are still a leader – our resurgence is a reality and the market has realised that.”

Laporta continued to lavish praise on Torres during his unveiling, saying: “You are young but you already have plenty of experience.

Provided they can get him registered for La Liga action, Torres’ arrival at Camp Nou will be a significant boost for Xavi’s side. Barça’s head coach has made no secret of his desire to strengthen up front as he has been forced to turn to the B team to fill up the starting XI in recent times.