For Nyesom Wike 2022 began before it began 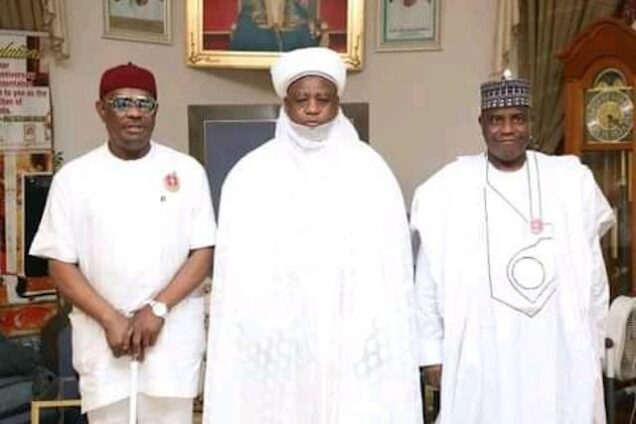 Wike, Sultan of Sokoto and Tambuwal

He was in Sokoto State on New Year’s eve. He was in Benue and Bauchi States on New Year’s day. His state-wide broadcast revealed months of considerations. He itched so long for 2021 to end. The new year is here at last. But for Governor Wike, the year began before it really began.

The governor is north-trotting and he is doing so assiduously. The race for 2023 has begun in earnest and he knows where Kings are made.

Never mind that he recently warned would-be governorship aspirants in Rivers PDP never to venture northwards to Abuja, to consult the national chairman of the party and NWC. Never mind that as he gallivants around, no Rivers PDP member can voice his/her aspiration into the smallest elective office.

The governor’s visit to the palace of the Sultan was on the last day of December 2021, to commiserate with the Sultan over an incident that happened very early in the month. There are many kites in the sky. This is just one.

This time he said of the Sultan: “You have had sleepless nights talking to everybody to see ourselves as one. We must commend and encourage you not to withdraw because it is the position God gave you”.

The governor is wrong. Nigeria needs strong institutions and not strong leaders. Nigeria does not need rulers and dictators.

Nigeria needs leaders that will steer the ship of state to mutually agreed destinations. Leaders to actualize the Nigerian vision, leaders with moral and ethical excellence, leaders with emotional stability, leaders with intellectual and social capacities. Nigeria does not need strong men. Governance is no boxing or wrestling bout.

“However, the beauty of the city is being defaced by illegal and indiscriminate trading on our streets, under flyovers and other unauthorized open spaces as well as the challenges with the current largely inefficient refuse disposal system”.

The governor’s speech needs a thorough evaluation. His damning verdict on the performances of the Rivers State Waste Management Agency only restated what people have been saying all along.

Surprisingly, the governor usurped the functions of the Waste Management Agency. He said nothing and did nothing to reposition it to do its work better.

The sweeping measures contained in the governor’s new year broadcast shall be reviewed in subsequent writeup.