I never got pregnant for Portable, lady in viral video retracts claims 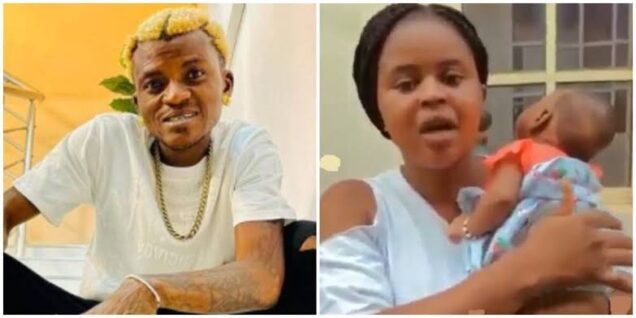 Portable and Abike who lied about getting pregnant for him

Abike, a lady in a viral video over the weekend has retracted her claims that fast-rising musician, Portable got her pregnant and abandoned her.

In the viral video, Abike made several spurious claims that she met the fast-rising star months ago as a sex worker and she got pregnant for him.

She also said the singer has refused to pick her calls now that he is a known star as she implored Nigerians to get involved and persuade the music star to perform his responsibilities as the father of the baby she carried in the video.

However, she made a u-turn in another video as she said she was only joking about her claims and had not met the musician before.

She said that she was just joking with the video, adding that she did not know that the video would go viral.

The young lady also claimed that the baby she was holding was a neighbor’s child.

While all the drama ensued, the ‘zaa zoo’ crooner failed to make any comment on the matter. He was in Ilorin, Kwara State capital on Sunday and returned to perform at the African Shrine, Lagos later at night.

Since Portable released his hit track featuring Olamide and Pocolee, his flames have only continued to burn harder.

Over the week, he received two car gifts: a Range Rover Sport and Toyota Corolla from fans amidst numerous cash gifts.