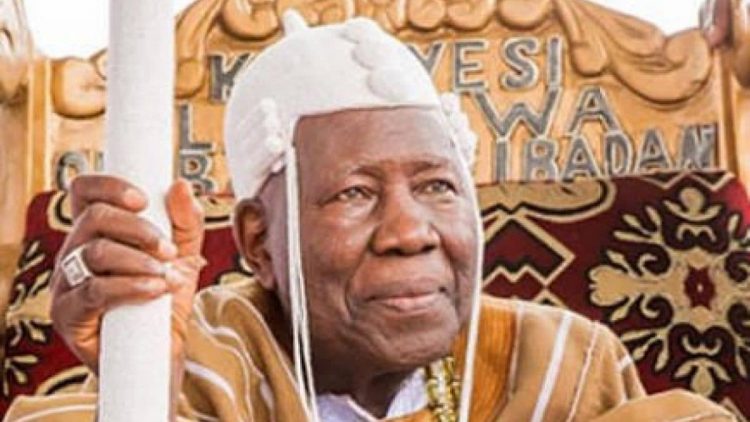 By Omoniyi Ibietan
The Ibadan paramount monarch, His Majesty, Saliu Adetunji, Ogunguniso 1, has just transited gloriously at age 93. His was a fulfilled life by all measures. Tributes, elegies and condolences, from President Muhammadu Buhari to Governor Seyi Makinde down to the citizens, have captured the beauty of determination and focus that the monarch’s life signposted.
He administered a land that is both historic and cultural. We do not need Shakespeare or Homer to rewrite the story of the significance of Ibadan. In the literary world, Wole Soyinka, Chinua Achebe and others whose defining moments had Ibadan footprints represent even more defining matrices of the essence of Ibadan.
I do not intend to undertake an exposition on the political significance of the city reputed as West Africa’s largest. Neither do I intend to speak about the military adventures that were at the heart of the evolution of Ibadan, and indeed the centrality of Ibadan in the restoration of peace to Yorubaland. That was after the devastating fratricidal wars that historians have captured as “The Nineteenth Century Yoruba Wars”.  I love Ibadan’s distinctive principles of ascendancy to the royal throne. And I think most people who have bemoaned the recklessness primogeniture has made of some towns will love Ibadan for this.
I write to correct reportorial and journalistic errors that state that the monarch had “no educational background”. I don’t know how this phrase gained traction in characterising those who have not been educated informal learning environment. But it is wrong, condescending, inappropriate, misleading and very offensive to use such phrases in narratives whose objectives, to start with, are to glorify the distinctive life of the monarch. That is the trajectory of his sojourn on mother earth. He started his self-conscious economic activity as a subsistence tailor and ultimately with great mastery, before migrating to music marketing and other activities.
Anyone so circumstanced, and who rose through 23 levels of hierarchy to become a pre-eminent King, cannot be described as having no educational background. And it is not just the late monarch, many people who have been so described do not also fit that characterisation.

Professor John Ayotunde Bewaji, emeritus professor of philosophy at the University of West Indies, had described such mindsets and the philosophy of education-oriented solely informal conventional learning and certification as “a tyrannisation of the unschooled”. Indeed, by my reckoning, based on UNESCO’s framework, anyone who is able to read or write in any language, is educated and has an educational background.

I have listened to the late monarch speaking. He spoke in simple good English whenever he needed to do so, and not the atrocious Englishes that many of us, so-called elites and the schooled, bandied in the public space. The monarch once said: “I have no educational certificate and I never attended any school.” By every stretch of contention and reasoned discourse, his statement does not mean the same as having no educational background. Not attending formal school is not the same as having no educational background. I have not met anyone who has no educational background. I mean, the totality of life’s experiences provide educational contexts.
Professor John Ayotunde Bewaji, emeritus professor of philosophy at the University of West Indies, had described such mindsets and the philosophy of education-oriented solely informal conventional learning and certification as “a tyrannisation of the unschooled”. Indeed, by my reckoning, based on UNESCO’s framework, anyone who is able to read or write in any language, is educated and has an educational background. After all, no one jumps onto speaking and writing without going through some tutelage or observational learning.
Oba Adetunji had an educational background, he was educated. He applied the education to his crafts, businesses and to socio-cultural and traditional leadership. When death is glorious, let’s make it more glorious.
May all those affected by his transition be comforted. May God rest his soul.