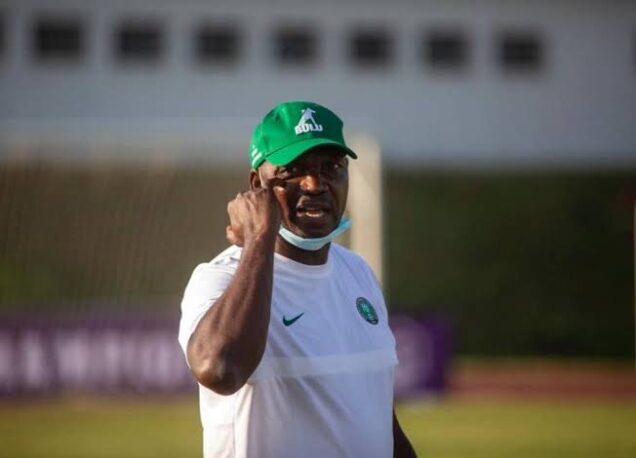 Super Eagles interim Head Coach, Augustine Eguavoen, has described his team as a good blend of youth and experience ahead of the 2021 Africa Cup of Nations (AFCON) in Cameroon.

He also said that from what he has seen, the pack has what it takes to play modern football.

Eguavoen made the remarks after the team’s first training session at the main bowl of the Moshood Abiola National Stadium in Abuja.

The coach, who said that the players were being put through their paces, expressed delight with their performances, adding that he saw a lot of energy and speed in the team.

“I am very impressed with what I’ve seen today. The team is a good blend of both the young and experienced players.

“A majority of the players that made the 28-man list and who participated in the team’s first training session today are quite young.

“So, there is a lot of energy, there’s a lot of speed and that’s exactly what you need in the game of modern day football,” he said.

The gaffer noted that his goal and focus was to ensure the total commitment of the boys as well as their ability to play according to instruction and his pattern of play.

“I expect 100 per cent commitment from the boys and have explained to them the way I want them to play.

“So the next job for me now is to see how they apply their skills and abilities during our training sessions and see those who best fit into the various positions and the way we want to play,” he said.

The coach also expressed his disappointment over the absence of some key players in the squad, noting that their non-availability was painful.

He also said that there was nothing anybody could do about the situation.

“I was in constant touch with Emmanuel Dennis and he indeed made a lot of efforts, but his club (Watford FC) refused to release him and unfortunately, there is nothing anyone can do about the situation.

“As for Victor Osimhen, we all know how eager he wanted to play for his country. He is very committed and a true professional.

“However, we have to always consider the health of the player first. In as much as we want to win the Cup, I think his health is more important.

“He has assured us that even though he will not be with us physically at the tournament, but his spirit will be with us and we believe that.

“Having said that, I am in touch with the rest of the squad and can confirm to you that they will all be available latest by tomorrow (Monday) evening,” he said.

The team would still have two more training sessions before flying out of the country on Wednesday to their camp in Garoua, Cameroon.

No fewer than 16 more players are still being expected in the Super Eagles’ camp at the Bolton White Hotel ahead of the 2021 AFCON scheduled to kick off on Jan. 9 and end on Feb. 6.

The group stage will see Nigeria in Group D taking on Egypt on Jan. 11, Sudan on Jan. 15 and Guinea Bissau on Jan. 19.

All three matches will take place at the Adjia Stadium in Garoua.