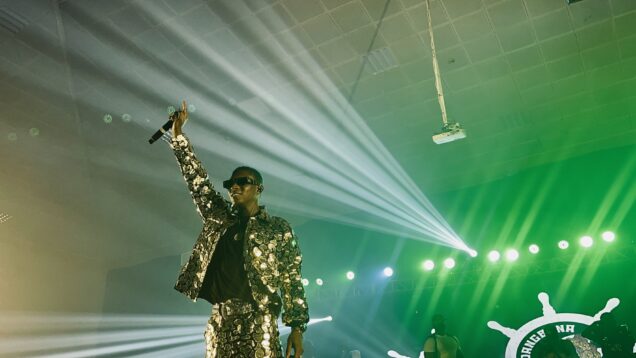 Afropop star, Akinbiyi Abiola Ahmed popularly known as Bella Shmurda could not wish for a better way to open the new year after he pulled out all the stops at the famous second-most populous city in Africa, Ibadan.

It was the first major concert for the Okokomaiko, Lagos-born superstar since he broke into the Nigerian music scene in 2020.

A teeming crowd of fans of the star artiste thronged Kakanko Inn Hall, the venue of the concert to experience what their favourite had to offer.

Bella Shmurda broke into the Nigerian scene after his debut single “Vision 2020″, and a follow-up (remix) to the single in which he featured Olamide, and after the release of his critically acclaimed debut EP ‘High Tension’ and he has not quite slowed down.

The ‘CashApp’ crooner had a successful run in 2021 as he announced the second volume of his debut EP titled “High Tension Vol. 2”, by sharing the album artwork on his Instagram page. He released the EP on 7 July 2021.

Propelled by sounds from a well-prepared live band, Bella Shmurda serenaded the energetic audience with his popular tunes such as Omnipotent, Ginger Me, Sho Mo Mi, and Triaumphant off Olamide’s album.

He also performed Rush, Fatima, World, Soldier Go, Far Away, Lako, among others

From performing some of his hit songs and collaborations, Bella Shmurda went on to bring out many artistes and they thrilled fans together.

Another highlight of the night was when Bella brought out her elder sister, Fatima on stage to whom he dedicated a song titled Fatima in his first EP to.

DJ Spinall, Small Doctor, Soft, Zlatan, Barryjay, Superwozzy, Obaz, Pappysnoopy, Idowest, Baloranking, DJ Gabi among others spiced up the event with their performances. Yemo Lee and Papaya Ex were the hosts of the night.