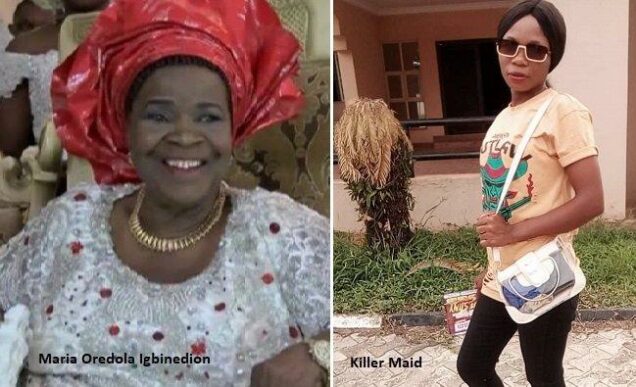 The 25-year-old suspect was remanded along with her accomplices, Patience Okoro (39), Francis Taga (51), Ezikiel Danjuma (24) and Abraham Kuje.

They will be kept in jail pending advice from the Director of Public Prosecution (DPP), of the State Ministry of Justice.

Earlier, the Prosecutor, CSP Peter Ngwumba, told the Court that the suspects were charged with murder, accessory to murder, negligent act, causing harm, robbery among other offences.

He said the suspects were arrested between 3 December and 13 December at various towns such as Benin, Aba, in Abia State and Ikom, in Cross River State.

The Prosecutor further told the Court that the prime suspect, Dominion Okoro, a cook to the deceased, on December 2, in Ugbor, GRA Benin, killed her and stole her N100,000, a golden wrist watch and necklace and absconded.

He said the suspect after committing the crime, informed her elder sister, Patience Okoro, about the crime who instructed the suspect to run away with the stolen items.

Ngwumba told the Court that the third accused person, Francis Tagaa, aided the suspect to escape by taken her to Agbor Park, Ikpoba Okha Local Government Area of the State, to enable her escape arrest after she had robbed and killed the deceased.

He said Ezikiel Danjuma and Abraham Kuje who were security guards at Maria Igbinedion’s home conspired among themselves and unlawfully committed negligence of duty by allowing Dominion to escape.

The Prosecutor urged the Court to remand the accused persons in Correctional Centre, pending the advice from the DPP

Justice Ikpomwomba, who remanded the suspects in Correctional Centre, adjourned the case till 26 January 2022.