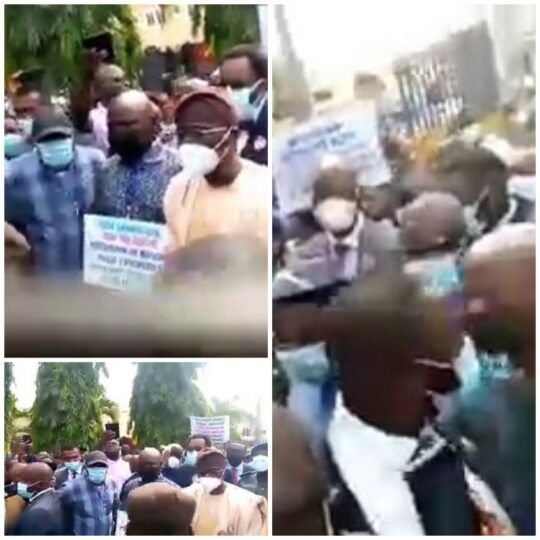 The Governor of Lagos State, Mr. Babajide Sanwo-Olu, has visited the scene of the protest staged by Magodo residents.

The residents of Magodo phase 2 estate staged a protest over the planned invasion and demolition of their properties.

The residents converged in front of the estate, demanding the intervention of the state government.

They hung placards around their necks which read “Gov Sanwo-Olu stop the illegal possession of Magodo phase two properties which were legally bought from the LASG!” “The action of Adeyiga family could lead to loss of lives. Gov Sanwo-Olu act now!” “Mr governor act now, lives are being threatened by the continued presence of the IGP’s team” “LASG — our C of O is genuine”.

Court bailiffs had also sealed some properties in the estate in the enforcement of a Supreme Court judgement.

However, Sanwo-Olu who visited the scene assured the residents that the matter will be resolved.

The governor said, “My great residents of Magodo, I bring you good tidings. The chairman of the residents association, the Attorney General, other cabinet members and also the Assistant Inspector-General of Police are here.

“It’s difficult to start the New Year like this. It’s because of the importance of seeing to all of the information and lack of proper information that I had to take up this assignment myself.

“When the first incident happened about two weeks ago, I indeed intervened and If you remember very well, the action was immediately halted and there was no incident again. Throughout the festive period, we started communication.

“One of the things that we need to first understand is that the residents, the people that went to court and the police themselves are my subjects. So, I have the responsibility to ensure that fairness and equity are entrenched.

“The people that went to court have Supreme Court judgment while the residents living there(Magodo) have proper title and the means to live there.

“So, in the car, I had spoken extensively with the Inspector-General of Police and the Attorney General and we’ve resolved all of the issues.

“So, what we’ll see is that there is going to be a total stand down and tomorrow we’ll be inviting the representatives of the judgment creditors. We have actually started a committee, but I want to invite them again officially tomorrow by 11 O’clock to come over.

“The state government, the residents association and the police will be at the meeting so that whatever it is that brought about this trouble and headaches will be laid bare.”

The Governor expressed the belief that the meeting will address the issues and will help stakeholders to reach an amicable resolution.

“I want everyone to ensure that peace is restored in the estate and that citizens go about their lawful businesses, knowing fully well that nobody will be harassed, no property will be trampled upon pending when we reach a resolution,” he said.

Sanwo-Olu assured the residents, saying, “None of your houses will be marked again. For those marked, we’ll try and sort the situation out.”

Some police officers said to have been accompanied by hoodlums arrived at the estate with bulldozers on December 21.

The hoodlums marked some houses in the estate with an inscription which reads ‘ID/795/88 possession taken today 21/12/2021 by court order’ in what appeared to be a move to demolish the marked houses.

But members of the Magodo Residents’ Association (MRA) locked up the gates leading to the exit and entry points of the estate in a bid to resist what they described as “forceful takeover”.

Following the intervention of the Lagos government, the police withdrew and normalcy returned to the estate the next day.

In a subsequent statement, the Lagos government condemned the attempt to demolish houses in the estate, vowing to prosecute invaders.

Moyosore Onigbanjo, attorney-general of Lagos, said the case dates back to the demolition of properties at Shangisha village between 1984 and 1985, after which a supreme court verdict ordered the state to give the Shangisha landlords 549 plots of land as a “matter of first priority”.

Onigbanjo, however, said the verdict of the supreme court only relates to “allocation” and not “possession” of any land.