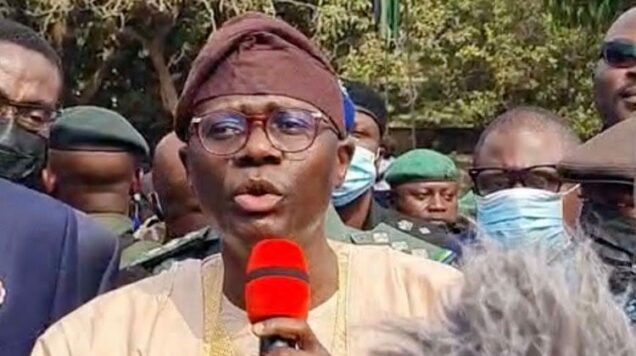 Sanwo-Olu in Magodo on Tuesday

The land ownership crisis in Magodo area of Lagos has thrown up several hot button issues about Nigeria’s federalism.

These are the powers of the Inspector General of police over a state governor, regarded as the chief security officer of his state.

It also sets in focus, the responsibility for the enforcement of court judgments. Is it the local sheriff or the attorney-general of the federation, working in league with the IGP?

The issues arose following a viral video in which an ordinary police CSP disobeyed the vacate-order given by the Lagos State governor, Babaajide Sanwo-Olu.

The officer, Abimbola Oyewole, said he and his men were occupying Magodo Estate on the instruction of the IGP and the Attorney General of the Federation, Abubakar Malami.

The Magodo Lagos incident is a rule of law catastrophe. AGF and IGP’s agents lawfully cannot invade the estate in the pretext of enforcing a Supreme Court Judgment. They are not Sheriffs of Court empowered to so do under the SCPA.

If the LASG disobeyed the Court, redress venue is still the Court.Not office of IGP or AGF!

What the duo and the police are doing in that estate is blatant illegality.

It has no other name. The AGF has no power to instruct the IGP to enforce the judgment of the Supreme Court.

The IGP has no authority outside the provisions of the Sheriffs and Civil Process Act to enforce the order of any court, Supreme, Appellate or High .

If the judgment is not being obeyed, it is still the court that parties must return to. Court judgments are not enforced by policemen but by the sheriffs who are assisted, security-wise, by the police.

The enforcers are the sheriffs and the mechanism of enforcement is a “ civil “ process. Not a martial or police process!

The SC has the NJC by its side to receive a petition and punish any judicial officer that may be frustrating enforcement of its orders and can direct that the CJ of any state should ensure that any sheriff that subverts its orders be sanctioned.

The judgment creditors have my sympathy. My sense of justice should make me their ally.

But I can’t in good conscience support a situation in which agents of the central government in a supposed Federation are recklessly invading a state in the name of enforcing a judgment in the face of tons of judgments being disobeyed by the Federal Government and its agencies, including the police.

No reasonable person should support this irresponsible conduct.

For the Lagos State Government that is locked in a fresh legal battle with the judgment creditors on appeal over the writ of possession that was issued and set aside, the resolution route is a settlement and compliance with the judgment.

The judgment of our courts is binding on all authorities and persons- Section 287 of the Constitution of the Federal Republic of Nigeria.

The Judiciary that gave the judgment is the third arm of government.

It is therefore an act of executive lawlessness if the Executive Branch wilfully and perennially disobeys the decision of the judicial arm. We note, however, that litigation is still pending on the enforcement aspect of the judgment.

Incidentally, history is repeating itself. The complaint of the judgment creditors was that while their action was in court and after the court had granted an injunction in their favour, the Lagos State Government and its officials kept allocating their lands to third parties. Terrible? Of course.

But consider the situation today. While the fresh action on the set-aside writ of possession is pending in the Court of Appeal, the judgment creditors have resorted to self-help, illegally aided by the AGF and IGP to take over the subject matter of the pending appellate litigation.

Ebun-Olu Adegboruwa, SAN, submitted that only restructuring can save Nigeria

He quoted Section 215 of the Constitution of the Federal Republic of Nigeria, 1999 (as amended) that shows that Nigeria runs a unitary state and not a federal structure.

(b) a Commissioner of Police for each state of the Federation who shall be appointed by the Police Service Commission.

(3) The President or such other Minister of the Government of the Federation as he may authorise in that behalf may give to the Inspector-General of Police such lawful directions with respect to the maintenance and securing of public safety and public order as he may consider necessary, and the Inspector-General of Police shall comply with that direction or cause them to be compiled with.

Provided that before carrying out any such directions under the foregoing provisions of this subsection the Commissioner of Police may request that the matter be referred to the President or such minister of the Government of the Federation as may be authorised in that behalf by the President for his directions.

(5) The question whether any and if so what, directions have been given under this section shall not be inquired into in any court.”

NIGERIA IS A UNITARY FEDERATION
The 1999 Constitution tells a lie against the people of Nigeria when it claims that we are running a Federation but strips the Governor of a State of powers over security.

In the final analysis, only restructuring can save this nation.
Those who make peaceful change impossible make violent change inevitable!”