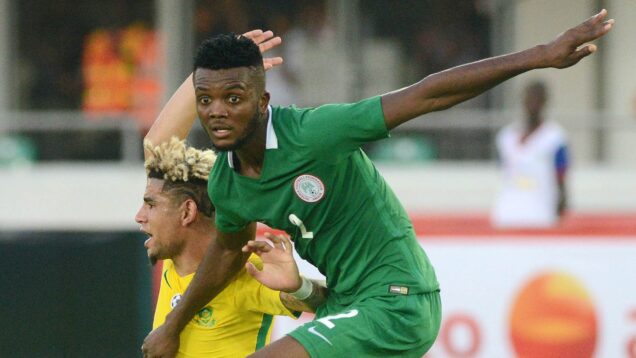 Super Eagles defender, Chidozie Awaziem has assured of the team’s readiness to correct the mistakes of the last AFCON in Egypt and go a step better to the finals in Cameroon.

At the 2019 edition in Egypt, the Super Eagles finished with a bronze medal after defeating Tunisia 1-0 in the third-place match.

The Eagles had earlier suffered a heartbreaking defeat against Algeria in the semifinal when Riyad Mahrez scored a late spectacular free-kick to give the foxes a 2-1 win.

Awaziem who was in the thick of the action at the last AFCON, said that the goal was to bring back the trophy at the end of the tournament.

“At the last AFCON (in Egypt) we came back with a bronze, but we want the gold this time around. We are going all out, we are not going to make the mistakes we made the last time.

“We’ll give our best to make sure we get the gold in Cameroon this time around,” he said.

The hard-tackling Turkey-based Alanyaspor FC defender said most of the players that made their debut at the last AFCON are now more experienced with better team chemistry.

He called on Nigerians to give the Super Eagles all the support to succeed in Cameroon.

The Super Eagles are in Group D where they will open their campaign in Garoua against Egypt on Jan. 11, Sudan on Jan. 15 and Guinea Bissau on Jan. 19.

The 33rd AFCON will take place in Cameroon between Jan. 9 to Feb. 6.