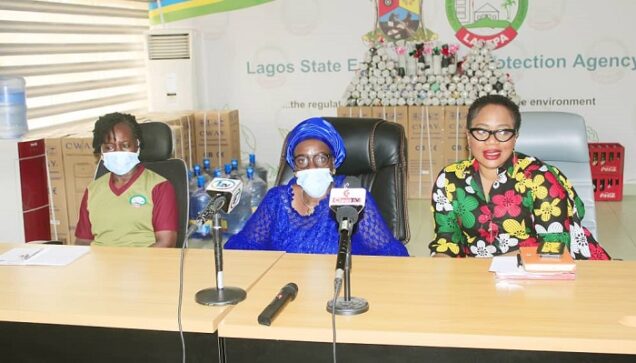 The Director, Admin and Human Resource, Lagos State Environmental Protection Agency, LASEPA, Mrs. Funke Adenle, the Permanent Secretary, Office of Environmental Services, Lagos State Ministry of The Environment and Water Resources, Mrs. Belinda Odeneye and the General Manager of LASEPA, Dr. Dolapo Fasewe during the launch of ban on Single Use Plastic in LASEPA on Tuesday in Lagos.

The Lagos State Environmental Protection Agency (LASEPA), has decried the increasing rate of single-use plastics, pet bottles, polystyrene and other non-biodegradable wastes in different parts of the State.

LASEPA said that urgent steps are needed to revert the trend with the encouragement of reusable plastics or biodegradable materials.

The Permanent Secretary, Office of Environmental Services, Lagos State Ministry of The Environment and Water Resources, Mrs. Belinda Odeneye raised the alarm recently during the launch of official ban on single-use plastic among the staff of LASEPA.

She said that all hands must be on deck in order to guarantee quality health for the citizenry while also reducing the rate of some avoidable loss of lives caused by polluted environments.

Mrs. Odeneye appreciated LASEPA for championing the advocacy on reusable plastics and for setting the pace for environmental sustainability for emulation by other Ministries, Departments and Agencies, MDAs of the State Government.

While saying that the Ministry of the Environment and Water Resources aligns with the advocacy on reusable plastic by LASEPA, Mrs. Odeneye averred that the Ministry had in the past taken some measures to curb single-use plastics.

She said: “The Ministry of Environment and Water Resources has a Plastic Waste Management Policy in place, we also have a Recycling Bank for plastic wastes within the premises where people can exchange their plastic wastes for money.

“Also recently, the Ministry held Sanitation Competition where Surulere emerged the winner and were rewarded accordingly. So we are not just advocating for a cleaner environment through our policy on plastic waste management, but we have also put a reward system in place to encourage willful compliance.”

She advised Lagosians to be mindful of the health implications of their attitudes to the environment, saying that all unhealthy environmental attitudes have a vicious cycle effect on the lives of every resident.

On her part, the General Manager of LASEPA, Dr. Dolapo Fasawe said that LASEPA being the agency in charge of environmental protection is leading its talk with the launch of ban on Single plastic use among its staff.

She added that the agency is experimenting the feasibility of the ban before making recommendations to other government agencies to embrace the advocacy on reusable items and ban on single plastic use.

Dr. Fasawe said: “Today, I will be handing over some dispensers as well as some reusable items to all the departments and units as my personal contribution to this campaign on the ban of single-use of plastic by LASEPA.

“Beyond giving out these items, the long term goal is to ensure compliance by all the staffs of this agency because I want the ban on these items to be effective and I also want all the staffs to become advocates of this initiative in their respective
places of residence.

“This is Lagos State Environmental Protection Agency and we have to be proactive, we have seen that people are not working the talk
There is lot of meetings and conventions where we talked about plastic pollution with different NGOs but nothing or little has been done so far about the various recommendations.

“This is the reason why LASEPA as a front runner in terms of environmental protection decided to practice what we preach.”

The General Manager recalled how the journey started last year with the ban on single-use plastic within LASEPA.” After this, we started sorting our waste, pet bottles, paper waste and vegetal waste and I realized that the pet bottles were filling our dust bins faster than other waste items.”

On what Lagosians should expect from LASEPA in the new year, Dr. Fasawe disclosed that the agency will be focusing on air quality, in order to limit the effect of polluted air which is currently affecting vulnerable age groups, both the elderly and babies.

“This year we are going for air pollution, you must service your car as and when due, your generator must not emit smoke and even for the telecom sector, their mast, if they cannot use gas to power their masts, they will have to find a way to ensure that the waste oil is reused and reused and reused, “the General Manager stated.