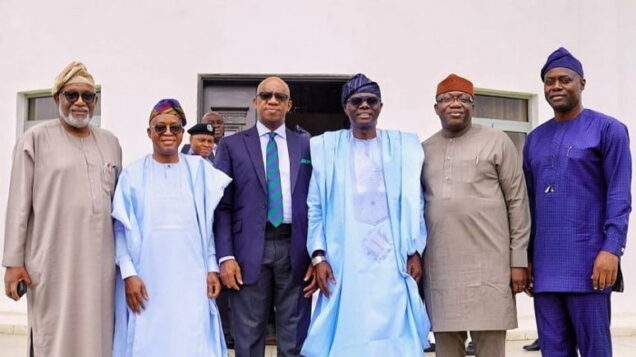 The South-West Governors’ Forum has railed against Nigeria’s so-called federalism after Lagos State Governor, Babajide Sanwo-Olu was disrespected by a chief superintendent of police, Abimbola Oyewole.

The junior police officer openly defied the order of the governor after the governor ordered the police to vacate the Magodo Phase 2 Estate.

Chairman of the South-West Governors’ Forum and Governor of Ondo State, Rotimi Akeredolu, SAN, in a statement described the incident as disconcerting.

He also called on the Lagos State governor to deploy the regional security outfit Amotekun to protect lives and properties in the state.

“We are in possession of a video which has gone viral on the social media concerning the disgraceful exchange between a police officer, a CSP, and the Governor of Lagos State, Mr Babajide Sanwoolu, the supposed Chief Security Officer of the State, at the Magodo Residential Estate.

“The content of the video is very disconcerting, and this is being charitable. The utter disrespect, which underlines the response of the officer to the Governor establishes, beyond doubt, the impracticability of the current system, dubiously christened “Federalism”.

“An arrangement, which compels the Governor of a State to seek clarifications on security issues in his jurisdiction from totally extraneous bodies or persons, is a sure recipe for anarchy.

“We condemn, very strongly, this brazen assault on decency. We call on the IG to explain the justification for this intrusion. This is not acceptable.

‘Any expectations of rapprochement between so-called federating units and federal security agencies are becoming forlorn, progressively, due to deliberate acts which mock our very avowal to ethics and professionalism.

“We condemn, in very clear terms, the role of the Attorney General of the Federation, Mr Abubakar Malami SAN in this act of gross moral turpitude.

“We, on our part, will continue to interrogate the current system, which treats elected representatives of the people as mere prefects, while appointed office holders ride roughshod over them as Lords of the Manor.

“If the purported Chief Security Officers of the States of the Federation require clearance from the office of the IG on matters within their areas of jurisdictions, only hypocrites will wonder why the current security crisis deepens and there appears to be no solution in the foreseeable future.

“We stand by our brother, the Governor of Lagos State. We advise him to deploy the Regional security outfit in the State to protect the lives and property of the people.

“We call on the President and Commander-in-Chief of the armed forces to rein in the excesses of certain elements bent on acting in a manner capable of eroding the bond of trust existing between the people and the Federal Government.

“It is preposterous for political appointees to seek to undermine the very structure of service upon which their appointments rest.”