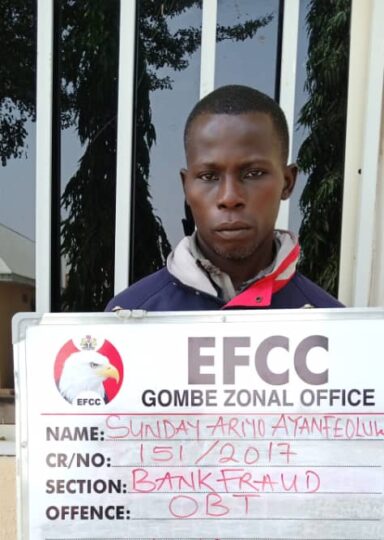 The Gombe Zonal Command of the Economic and Financial Crimes Commission, EFCC, on Tuesday, January 4, 2022, secured the conviction of one Sunday Ariyo Anyanfelowa.

Anyanfelowa, a radiographer and self-styled bitcoin and investment guru, was convicted for defrauding his victim to the sum of Nine Hundred and Thirty Thousand Naira (N930, 000.00).

The offense is contrary to Section 1 (1) and punishable under Section 1(3) all of Advance Fee Fraud and Other Fraud Related Offences Act, 2006.

The defendant who was arraigned on November 24, 2018, was sentenced to seven years imprisonment without an option of fine by Justice B.L.Iliya of the Gombe State High Court.

Anyanfeoluwa’s travail began sometimes in 2017 when he falsely represented himself in a WhatsApp Chat called “BIC Investment Giant”, to be a bitcoin expert and convinced the petitioner to part with the said sum for bitcoin investment with the promise of high returns on the investment to the victim’s e-wallet account.

However, the investigation by the EFCC revealed that the defendant withdrew the money sent to him from a Point of Sale vendor and diverted the proceeds to personal use.