Djokovic's deportation from Australia to wait till Monday 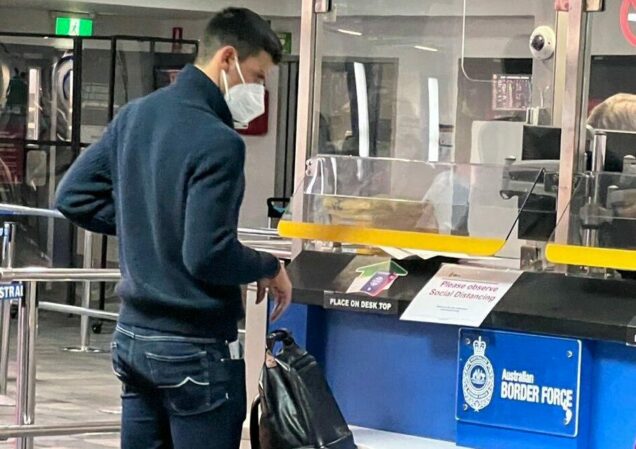 Novak Djokovic on landing in Australia

Novak Djokovic will know on Monday whether he will be deported back to Serbia or the UAE after a court hearing his appeal adjourned till then.

The world number one spent a day confined to a hotel room as he awaited the court’s decision on his deportation from Australia.

The 20-time Grand Slam singles winner will spend several nights more in the immigration detention, as he fights against the deportation move.

With his entry denied and his visa canceled by Australian Border Force officials who rejected his evidence to support a medical exemption for the country’s strict COVID-19 vaccination rules, Djokovic had to trade the practice courts for the courts of law on Thursday.

The nine-time champion’s chance of playing in the Australian Open starting Jan. 17 remains in limbo.

Federal Circuit Court Judge Anthony Kelly said there was a delay in receiving the application for a review of the visa decisions and the temporary ban on Djokovic’s deportation.

A lawyer for the government agreed the 34-year-old Djokovic should not be deported before Friday at the earliest, while the hearing was adjourned until Monday.

Djokovic’s trip was contentious well before he landed, with the conservative federal government and the left-leaning state government of Victoria seemingly having conflicting views over what constituted acceptable medical grounds for an exemption to Australia’s vaccination policy for foreign travellers.

Djokovic announced on social media Tuesday that he had “exemption permission.”

He landed in Melbourne late Wednesday with a medical exemption from Victoria state that was expected to shield him from the regulations which require all players, fans and staff to be fully vaccinated to attend the Australian Open.

That would have been okay to enter the tournament, but apparently not the country.

After a long-haul flight, he spent the night trying to convince border authorities he had all the necessary documentation, but the Australian Border Force issued an early morning statement saying Djokovic failed to meet entry requirements.

Health Minister Greg Hunt said the visa cancellation followed a review of Djokovic’s medical exemption by border officials who looked “at the integrity and the evidence behind it.”

The president of Djokovic’s native Serbia blasted the “harassment” of the star.

Djokovic was transferred Thursday morning to a secure hotel which is controlled by immigration officials and has previously housed asylum seekers and refugees.

Supporters draped in Serbian flags gathered outside during the afternoon in a show of support.

In the meantime, Djokovic’s lawyers launched the legal action which has delayed, at least temporarily, his deportation.

Quarantine-free access wouldn’t have been an issue if Djokovic could show he was fully vaccinated for the coronavirus.

Instead he applied for the exemption, a route that only became an option in recent months after Victoria state backed away from a full no-vaccination, no-play policy.

Questions have now been raised about the approval of the exemption.

The Sydney Morning Herald published letters sent in November from the Department of Health and the health minister to Tennis Australia which indicated that Djokovic didn’t meet the standard — as defined by the Australian Technical Advisory Group on Immunisation — for quarantine-free entry.

Asked about the confusion, Morrison said the onus was on the individual concerned to have correct documentation on arrival.

The prime minister rejected the suggestion that Djokovic was being singled out, but he acknowledged that other players may be in Australia on the same type of medical exemption.

Djokovic has spoken out against vaccines in the past and has steadfastly refused to acknowledge whether he received any shots against the coronavirus.

Djokovic’s initial social media revelation that he was heading to Australia became a hot political topic this week. Many Australians who have struggled to obtain sparsely available and often expensive rapid antigen tests, or who have been forced into isolation, perceived a double standard.

Critics questioned what grounds Djokovic could have for the exemption, and backers argued that he has a right to privacy and freedom of choice.

Djokovic tested positive for the coronavirus in June 2020 after he played in a series of exhibition matches that he organized without social distancing amid the pandemic.