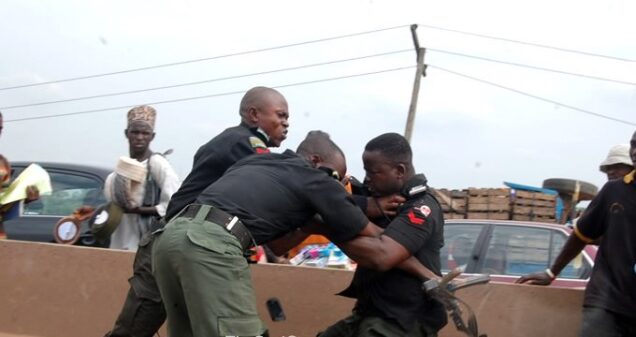 A 26-year-old man, Joshua Sale, who allegedly impersonated an Air Force officer and assaulted an ASP, was on Thursday docked in an Ikeja Magistrates’ Court.

The police charged Sale, whose address was not provided, with assault and impersonation.

The Prosecution Counsel, Insp. Mojirade Edeme told the court that the defendant committed the offence on Dec.17, 2021 at Ogba Bus-Stop, Lagos.

Edeme said that the defendant, who impersonated an Airforce officer, assaulted ASP Bamidele Ohonyon while performing his lawful duty.

He said the defendant, who falsely represented himself to be an Air Force official, punched the ASP, causing him grievous harm.

The offence, Edeme said contravened the provisions of sections 174 and 380(1)of the Criminal Law of Lagos State, 2015.

Magistrate I.O. Raji admitted the defendant to bail in the sum of N20,000 with two sureties in like sum.

Raji ordered that the sureties must be gainfully employed and must show evidence of two years tax payment to the Lagos State Government.

She adjourned the case till Feb. 9. for mention.