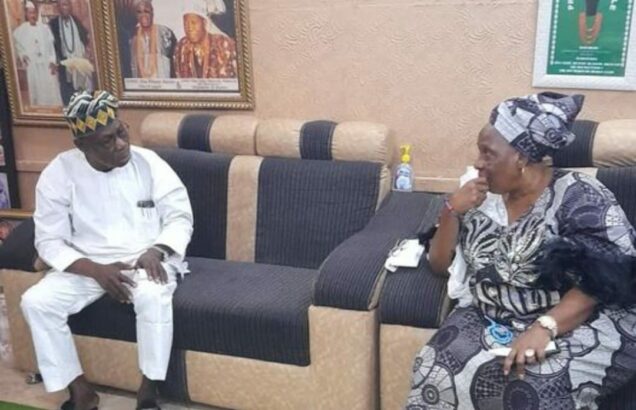 Former President Olusegun Obasanjo paid a condolence visit to the family of the late Olubadan of Ibadan, Oba Saliu Adetunji on Thursday in Ibadan.

Oba Adetunji, the 41st Olubadan of Ibadan died as a result of illness on Sunday at the University College Hospital, Ibadan at the age of 93.

Obasanjo arrived at the Popo-Yemoja Palace of the late Olubadan with Olayiwola Olakojo, the former Secretary to the Government of Oyo state.

He was received on arrival by Olubadan’s widow, Rasheedat, and Nureni Akanbi, Gbonka Balogun of Ibadan, who is also an elder brother to Rasheedat.

The former president prayed for the repose of the soul of the departed first class traditional ruler and promised his readiness to assist the family whenever the need arose.

In his tribute in the condolence register, Obasanjo wrote: “Kabiyesi, sun re. You lived for the service of family, community, state and the nation.

“You served committedly and God granted you longevity. We pray that your soul will be with your creator and the family and community will continue to thrive.’’

Rasheedat thanked the former president for the visit and assured that he would be carried along as plans unfolded.