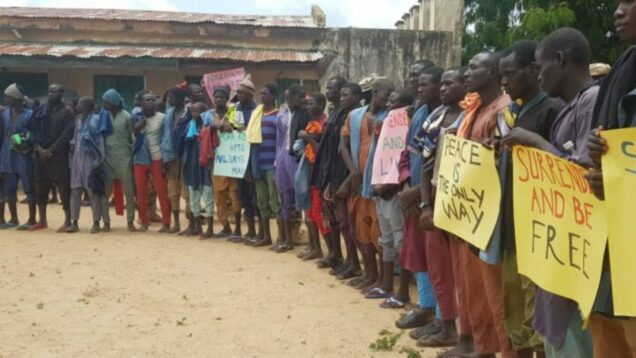 Troops of Operation Hadin Kai (OPHK) eliminated 950 Boko Haram/ISWAP terrorists in the North-East between May 20, 2021, and Jan. 6, 2022, according to the Defence Headquarters (DHQ).

The Acting Director, Defence Media Operations, Maj.-Gen. Bernard Onyeuko, made this known while reviewing progress of the operations on Thursday in Abuja.

Onyeuko said that troops eliminated several high-profile commanders and Amirs (leaders) of the terrorist groups during the period.

He said that 24,059 terrorists and their families comprising 5,326 adult males, 7,550 adult females and 11,183 children had so far surrendered to the troops in the region.

The spokesman said that all surrendered elements had been properly profiled and handed over to appropriate authorities for necessary actions.

Onyeuko further revealed that 79 terrorists were arrested while 113 kidnapped civilians were rescued by the troops within the period.

“In the same vein, a total of 195 assorted arms including AK-47 rifles, GPMGs, PKT guns and locally fabricated guns were recovered from terrorists in the course of the operations.

“In addition, a total of 2,385 rounds of different calibers of ammunition and 253 rustled livestock were recovered.

“Also, total of 14 gun trucks of the terrorists were destroyed in the course of the operations, while 16 gun trucks were captured by troops within the period,” he said.