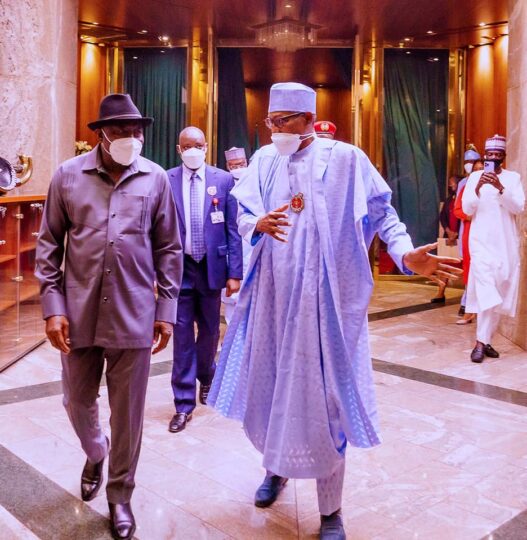 Former President Goodluck Jonathan visited President Muhammadu today to brief him on the situation in Mali ahead of the ECOWAS summit scheduled for Sunday in Ghana.

The Media Adviser to the former President, Mr. Ikechuwu Eze, made this known in an interview with newsmen on Thursday.

Eze said that Jonathan’s visit to the Aso Villa was not politically connected, contrary to some media reports.

“I can confirm to you that the visit of His Excellency to the Presidential Villa was purely to provide update on the political situation in Mali.

“As the ECOWAS Mediator in Mali, Jonathan, went to the Villa to update the President on his mediation role ahead of the ECOWAS summit slated for Sunday, in Ghana.

“Jonathan just came back from Mali yesterday (Wednesday) and he has gone to brief the president ahead of the summit of the Authority of Heads of State, which he also is attending,” he said.

According to him, the ECOWAS summit is held on Sunday, in Ghana and a key item for discussion is the development in Mali.

“As you know, there has been a delay in releasing the timetable for the conduct of Mali’s election. The country had a national conference which was just concluded and they made recommendations on the time elections could hold.
“So, ECOWAS will be meeting on Sunday and that is why Jonathan visited Buhari,” Eze said.

Jonathan had on Dec. 31 visited President Buhari at the Presidential Villa, Abuja.

Jonathan also arrived at the Villa at about 3 pm today.

He went into a closed-door meeting with the President immediately.

However, Presidency did not disclose the agenda of the meeting.