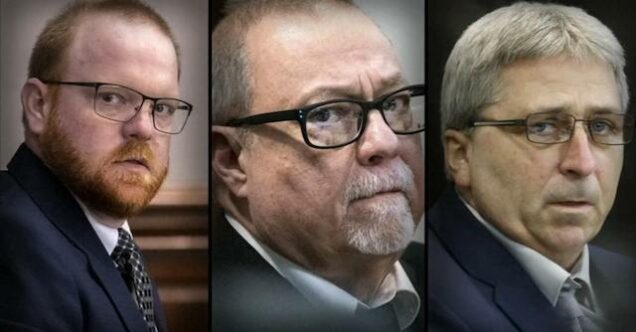 Father and son Greg and Travis McMichael and Bryan

The killers of Ahmaud Arbery bagged life in prison sentences on Friday for what the Georgia judge called the “chilling” murder of the Black man.

Arbery was running through the residential neighbourhood of Satilla Shores on the afternoon of Feb. 23 when the McMichaels decided to grab their guns, jump in a pickup truck and give chase.

Bryan joined the chase in his own pickup truck after it passed his driveway, and pulled out his cellphone to record Travis McMichael firing a shotgun at Arbery at close range. Arbery had nothing on him besides his running clothes and sneakers.

The video caused outrage when it emerged months later and it became clear that none of the men involved had yet been arrested after a local prosecutor concluded the killing was justified.

Arbery’s name was added to those invoked in nationwide anti-racism protests in 2020 that erupted after the police killings of George Floyd and Breonna Taylor, both of whom were Black

“They chose to target my son because they didn’t want him in their community,” Wanda Cooper-Jones, Arbery’s mother, told the court on Friday. “When they couldn’t sufficiently scare him or intimidate him, they killed him.”

In his sentencing, the judge quoted the mother’s remarks, saying they struck him as “very true.”

The McMichaels, a father and son, will now spend the rest of their lives in prison but Judge Timothy Walmsley ruled that Bryan could seek parole after 30 years in prison, the minimum sentence allowed for murder under state law.

Walmsley said at the hearing in Glynn County Court in Brunswick that he gave the McMichaels the harshest sentence open to him in part because of their “callous” words and actions captured on video.

“It was a chilling, truly disturbing scene,” the judge said of the frame in a cellphone video of the killing where McMichael begins to lift his shotgun at Arbery while the 25-year-old is about 20 feet away.

“He said Arbery was “hunted down and shot and he was killed because individuals here in this courtroom took the law into their own hands.”

Earlier, Arbery’s anguished relatives had addressed the court to argue that racial stereotyping led to the killing of the 25-year-old avid jogger.

Defense lawyers pleaded leniency, saying none of the three men ever intended for Arbery to be killed.

Linda Dunikoski, the lead prosecutor, had argued that the two McMichaels should die in prison, and only Bryan should be able to seek parole, pointing to what she called “a demonstrated pattern of vigilantism” by the McMichaels.

The defense lawyers have said they will appeal the convictions. Bob Rubin, a lawyer for the younger McMichael, said life without parole should be reserved only for “the worst of the worst.”

The three, who are white, also face a federal trial in February on hate-crime charges, accused in an indictment of violating Arbery’s civil rights by attacking him because of his “race and colour.”