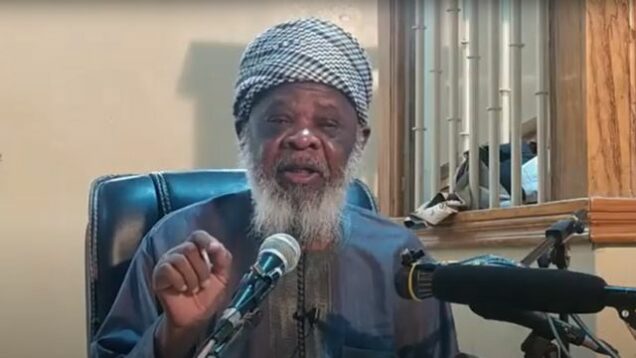 Gov. Abdullahi Ganduje of Kano State has described the death of Dr. Ahmad Bamba, a renowned Islamic Scholar, as shocking.

Ganduje said this in a condolence message by his Chief Press Secretary, Mr Abba Anwar on Friday in Kano.

“The death hit the state very well, he was a sound scholar during his lifetime, with deep sound of ingenuity and originality in his teaching of the sayings of the Holy Prophet Muhammad (Peace and Blessings of Allah Be Upon Him).

“He was an energiser of peaceful coexistence, whose method of teaching was aimed at promoting peace and tranquillity among all sects and beyond.

“This is a great loss that gravitates around with sorrow,” he said.

Ganduje urged Islamic scholars in the state to copy the good virtues of the late Sheikh.

“He laid a solid foundation on how to do “Da’awah” calling people to Islam, and he followed what he preached.

“He was a gentleman by all standards per excellence,” he said.

The governor, on behalf of the government and people of Kano State, condoled with the family of the deceased.

“I am extending our condolences to the immediate families of Sheikh Dr Ahmad Muhammad-Ibrahim.

“Not only his families, Kano or Nigeria, but the entire global intellectual community also lost a rare gem,” he said.

He prayed to the Almighty Allah to forgive his shortcomings, reward his good deeds with Al Jannah Firdausi and give the family fortitude to bear the loss.