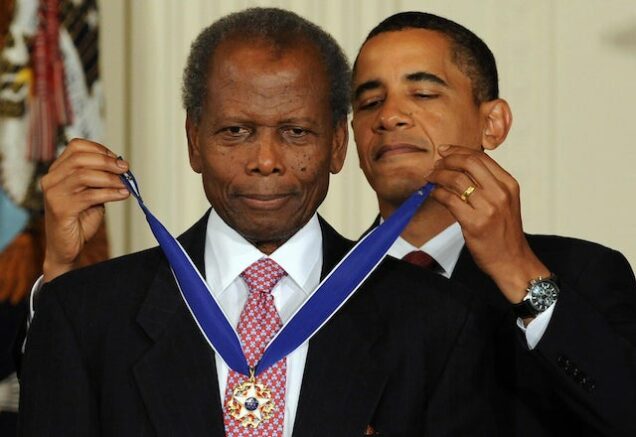 Sidney Poitier, the legendary African-American actor is dead. He was 94 years old.

NBC News reported his death in the Bahamas, citing a source close to the family.

Poitier, the Academy Award-winning actor experienced in life many of the racial stresses explored in his films.

He was the first African American actor to win the Oscar for a leading role.

He acted as an itinerant handyman helping fix up an Arizona nunnery in “Lilies of the Field” (1963).

This made him a respected figure in Hollywood and beyond. In 2009, President Barack Obama presented him with the Presidential Medal of Freedom for his contributions to American culture.

James Earl Jones, Robert Townsend and Quincy Jones were among those who cited him as an inspiration.

“Since you graced our screens more than 60 years ago, your talent and integrity have shattered barriers and inspired audiences everywhere,” actress Angelina Jolie said at the Academy Awards in March 2014, as she and Poitier presented the trophy for best director.

His death at a ripe age has nevertheless triggered a flood of tributes about how his Hollywood career inspired many.

“RIP Sidney Poitier. I’m thinking about the barriers you broke down, the performances you gifted us, the path you cleared so others could follow, the example you set, the life you lived and lived it well. Take your bow”, wrote actor Andi Osho on Facebook.

Stellar Gospel Awards wrote: Our hearts are saddened to report that Sydney Poitier is dead at 94. He was the first Black performer to win an Oscar for best actor, and he opened doors for Black film stars.”

The Film Detective also wrote on Facebook: “We are devastated to hear of the news of Sidney Poitier’s passing. A Hollywood trailblazer, Sidney was the first black actor to win the Best Leading Actor Oscar and gave us performances in Lilies of the Field, In the Heat of the Night, Guess Who’s Coming to Dinner, and so many more.”

Vickie Remoe said: He was an officer, gentleman, actor, activist, humanitarian, and the personification of grace and beauty on and off screen. An unforgettable embodiment of black excellence.
May his soul Rest In Peace!”

Poitier first gained wide acclaim shackled to Tony Curtis as a chain-gang escapee in “The Defiant Ones” (1958). Curtis insisted Poitier receive equal billing. Both were nominated for the best-actor Oscar, splitting the vote, and David Niven took the award for “Separate Tables.”

“Guess Who’s Coming to Dinner” (1967) featured Poitier and Katharine Houghton as an interracial couple trying to persuade their reluctant parents to bless their plans to wed. The film was nominated for the Academy Award for best picture, and Katharine Hepburn, playing Houghton’s mother, won the Oscar for best actress.

Two other films helped make 1967 an eventful year for Poitier. He played a teacher dealing with unruly students in the British production “To Sir, With Love.”

As a Philadelphia detective on a Deep South murder case in “In the Heat of the Night,” he uttered the line, “They Call Me MISTER Tibbs,” which became the title of a sequel.

Stanley Kramer, who directed Poitier in “The Defiant Ones” and produced “Guess Who’s Coming to Dinner,” called Poitier “the only actor I ever worked with who has the range of Marlon Brando — from pathos to great power.”

Poitier’s career as an actor declined in the 1970s. Fewer roles came his way after a 1967 New York Times article asked, “Why Does White America Love Sidney Poitier So?”

*With help from Seattle Times