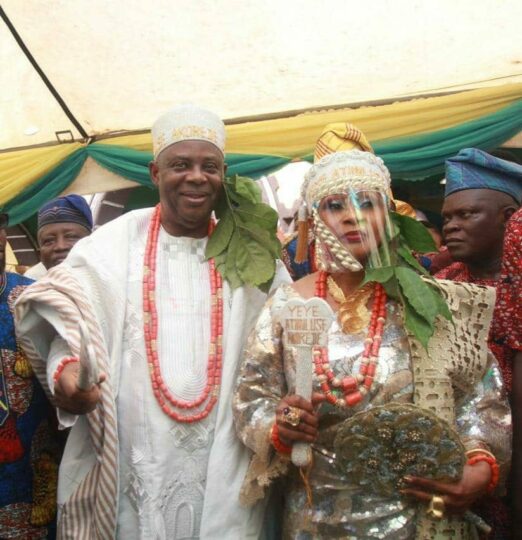 A massive crowd was present at the Police College in Ikeja on Friday to celebrate with Hon. James Abiodun Faleke; and his wife, Bukunola.

The three main traditional rulers in the Federal Constituency: Oba of Aguda, His Royal Majesty Saibu Hakeem Agbaosi Ewe Obaja 1; the Awise of Onigbongbo kingdom, His Royal Majesty Olusegun Adeyemi Ajasa Olaside 1; and the Olu of Oregun, His Royal Majesty Dr Olukunmi Olusesan Akingbola Ikuduro 1, performed the installation at the palace of the Onigbongbo monarch before the train moves to the Police College for the reception.

The National Leader of the All Progressives Congress (APC), Asiwaju Bola Ahmed Tinubu was the Father of the Day while his wife, Senator Oluremi is the Mother of the Day.

The Speaker of the House of Representatives, Rt Hon Femi Gbajabiamila; the Lagos State Governor, Babajide Sanwo-Olu; and Chieftain of APC, Chief (Mrs) Kemi Nelson were the Special Guests of Honour for the event.

Speaking at the event on Friday, Gbajabiamila congratulated Faleke for the honor and his contributions to the development and growth of Ikeja Federal Constituency via his various empowerment programs which have empowered close to 10,000 residents of the Constituency.

Gbajabiamila also congratulated Bukunola for standing by her husband at all times.

He said: “I want to congratulate you (Faleke) for this great honour and my special congratulations go to your wife, if not for her this could have been unachievable.”

Gbajabiamila added that “Faleke is a great man who has performed well as the Chairman of the House Committee on Finance, sometimes all he has is 24 hours to deliver and he always comes through. I congratulate you once again and I look forward to more success.”

See more photos from the event below: