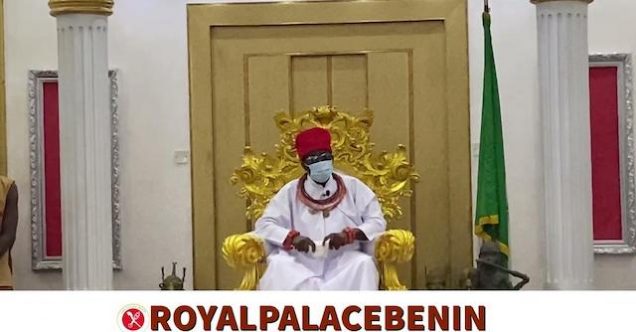 A Film Maker, Mrs. Patience Okhuofu, on Friday visited Oba of Benin Ewuare II to inform him of her intention to work on a movie, titled “Idia N’Iyesigie” (Idia, the queen mother).

Okhuofu also utilized the event to commend the monarch for his leadership qualities in the fight against human trafficking among Edo youths.

While speaking at the palace, the filmmaker said: “I want to commend you for all the things you have been doing here in Edo, especially with human trafficking. I was part of the celebration when they brought back the artifacts.

“I am here today because am doing a project on our beloved mother, Queen Idia. I have been working on this project for over five years and I said it would be necessary for me to come and request your blessing on this project.

“I can’t go further on this project without your blessing and that is why I am here today to ask for your blessings for me to move ahead with the project,” she said.

Reacting to the statement made by Okhuofu, the monarch directed her to bring her script before the Benin Traditional Council for scrutiny.

Okhuofu, however, said that she expected that she would be asked for the script because the project is massive and the Oba is passionate about Queen Idia.

She said she is satisfied with the directive of the palace and promised to present the script before the Benin Traditional council as directed.

Earlier, Mr. Dennis Idahosa, Representing Ovia Federal Constituency, said that he was on the entourage of the filmmaker to the palace to appreciate all the Oba has been doing in developing the state and also his contribution to the return of the artifacts.

In his remarks, the Oba of Benin, Oba Ewuare II, stated that the proposed film deals with core Benin royal history and so the script should be subject to scrutiny by the Benin Traditional council.

Ewuare said that the scrutiny of the script will avoid contradiction and mistakes that are capable of misleading the public.

According to Wikipedia, Queen Idia was the mother of Esigie, the Oba of Benin who ruled from 1504 to 1550.

She played a very significant role in the rise and reign of her son.

She was a great warrior who fought relentlessly before and during her son’s reign as the oba (king) of the Edo people.

Queen Idia was also instrumental in securing the title of oba for Esigie following the death of his father Oba Ozolua. To that end, she raised an army to fight off his brother Arhuaran, who was subsequently defeated in battle. Esigie thus became the 17th Oba of Benin.

Esigie instituted the title of iyoba (queen mother) and conferred it on his mother, along with Eguae-Iyoba (Palace of the Queen Mother)