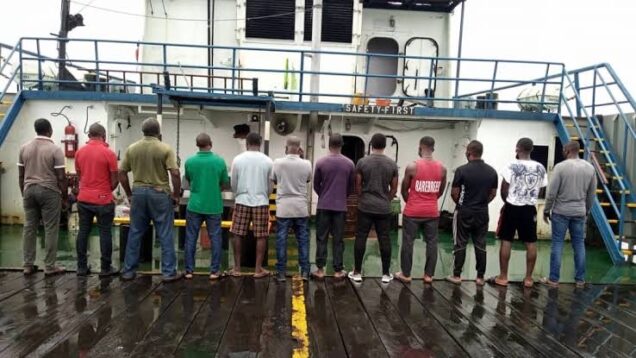 The Nigerian Navy on Saturday handed over impounded vessel – MTT4 and 20 suspected crude oil thieves to the officials of the Economic and Financial Crimes Commission (EFCC) in Bayelsa.

Commodore Patrick Effah, the Commander, Nigerian Navy Ship Soroh (NNS), handed over the vessel to the EFCC in Brass, Bayelsa.

Effah said that the vessel was loaded with 700,000 litres of illegally sourced crude oil.

He said the vessel was intercepted on Dec. 6, 2021 in Akassa River, while the crew arrested for indulgence in crude oil theft.

He said the handing over to the Commission was in compliance with the naval headquarters’ directives, adding that the vessel and her crew were complicit in the crime that borders on economic sabotage.

“The Nigerian Navy has been given the mandate to apprehend any ship suspected to be carrying out illegalities in the Nigerian maritime domain, however, by law, we are not allowed to carry out prosecution of offenders.

“We are directed to handover seized vessels to the EFCC for further investigations and possible prosecution,’’ he said.

Mr Anthony Mark, an official of the EFCC team, Port Harcourt Zonal Office, who received the vessel, reitrated the readiness of the commission to carry out thorough investigation into the matter.

“We will carry out thorough investigation with a view to determining the level of involvement, content of the vessel and prosecution of those involved,” he said.

The News Agency of Nigeria (NAN) reports that officials of the Department of Petroleum Resources (DPR) collected samples of the content of the vessel for further laboratory analysis.