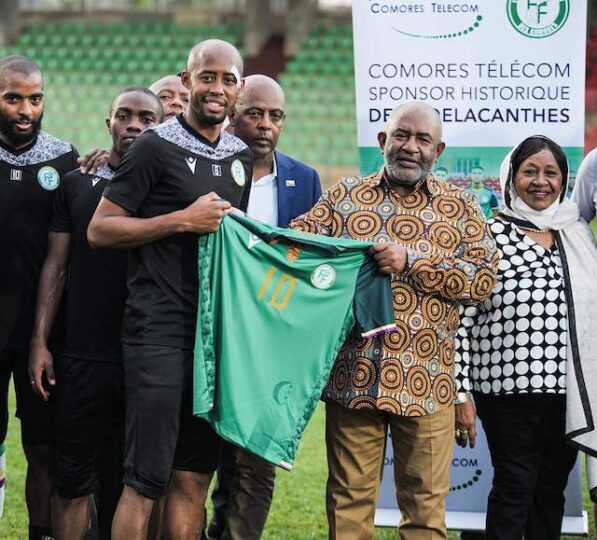 President Azali, his wife Anbari, right with the Comorian team in Cameroon

Comorian President Azali Assoumani arrived in Cameroon’s capital Yaounde on Saturday ahead of the start of the Africa Cup of Nations (AFCON) championship.

Azali and wife Anbari landed at the Nsimalen International Airport at 11:05 am local time and were received by Cameroon’s Prime Minister Joseph Dion Ngute.

On arrival, after hotel check-in, he headed straight to the training session of the national team.

He then returned to his Presidential suite at Hilton Yaoundé in the company of his wife.

Comoros are in Group C with Gabon, Ghana, Morocco. They will first play again Gabon on Monday 10 January.

Azali will be present at the Olembe Stadium in Yaounde for the opening AFCON match between Cameroon and Burkina Faso on Sunday.

He is the first African president to arrive in the host nation.

He will witness his country, which is taking part in the continent’s biggest football jamboree for the first time, play against Gabon on Monday.

AFCON will run for four weeks, with the final scheduled to take place at Olembe Stadium in Yaounde on February 6.