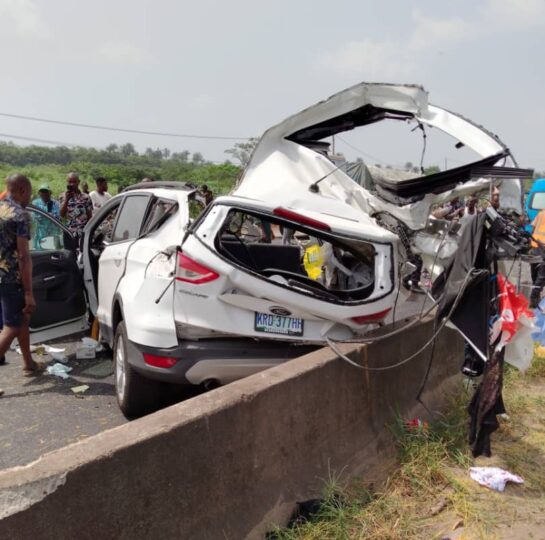 Two persons have reportedly lost their lives in a fatal auto crash that occurred in the early hours of Saturday, in Benin, capital of Edo State.

The crash occurred along Sapele Road, by PZ Junction, when a Toyota bus reportedly crashed into a stationery Ford Truck.

An eye witness who craved anonymity, attributed the cause of the crash to over speeding by the Toyota bus driver.

Following the incident, a riotous mob that gathered at the scene of the accident set the truck loaded with drinks ablaze, resulting in a heavy traffic gridlock on the busy highway for hours, causing motorists to divert to alternative routes in the axis.

He urged motorists in the State to imbibe safe driving practices and be disciplined while using the roads.

Commenting on the burnt truck, Benamaisia however cautioned the general public against taking the laws into their hands.

He added that the Corps would continue to work tirelessly in ensuring that violators of road traffic regulations were made to face the wrath of the law.

As at the time of filing this report, remains of the accident victims had been deposited at an undisclosed hospital by combined team of FRSC, Police and personnel of the Edo State Trafficking Management Agency (EDSTMA).