Yahaya Bello to Muslims: 'We should be telling ourselves the truth' 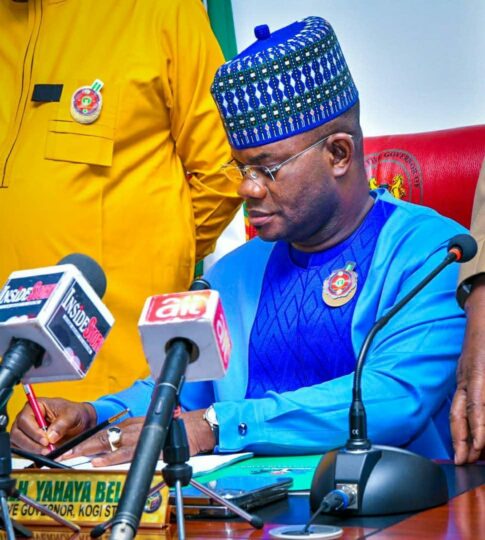 Gov. Yahaya Bello of Kogi has urged Muslims worldwide to always embrace the truth and stand by it, saying ”truth is sacrosanct at any time”.

Bello made the call on Friday in Lokoja, at the second day of the three-day Annual Conference of the 4th Nigeria World Maulid Anniversary, in honour of the Holy Prophet Muhammad, with the theme: ”The Prophetic Solutions To The Questions of Humanity”.

The conference was organised by JAM’IYYATU ANSARIDDEEN (ATTIJANIYYA), under the leadership of His Spiritual Eminence, Sheikh Muhammad Mahi Ibrahim Niass, the Grand Khalifa Worldwide.

Bello urged Muslims to know that JAM’IYYATU ANSARIDDEEN (ATTIJANIYYA) remained one all over the world.

The governor noted that the annual conference was to honour the holy prophet Muhammad, stressing that the event would witness comprehensive prayers for Nigeria and President Muhammadu Buhari, for peace, stability and progress in the country and the world at large.

Bello noted that he allowed the occasion to be held in his state because he is a true Muslim that believed in telling the truth always.

He added: ”We should be telling ourselves the truth in Islam and the society at all times”.

In his remarks, Khalifa Muhammad Sanusi ll, the President General Jam’iyyatu Ansariddeen (Attijaniyya), Nigeria, advised Muslims to be cautious of time and imbibe the culture of prophet Mohammad to solve societal problems.

Sanusi, who also spoke on behalf of Shiekh Ibrahim Saleh, the Grand Mufti of Nigeria, urged Muslims to always hold on to Sunah, be honest and seek more knowledge in all their endeavours.

Sanusi enjoined the Muslim community to work together and search for knowledge to better themselves and the society, stressing that knowledge is leadership and knowledgeable people are leaders.

Sanusi, who was the former Emir of Kano, admonished Tijjaniyya followers to adhere strictly to the teachings of prophet Muhammad and live as pure and righteous Muslims.

He further called on all Muslims, especially Tijjaniyya followers to be prayerful, honest, unite, humble and desist from engaging in any form of evil.

Earlier, Prof Ibrahim Makari, the Chief Imam of the National Mosque Abuja, in his lecture, titled: ”Religious Tolerance”, urged Muslims all over the world to always work to study how Prophet Muhammad (SAW) solved the problems of humanity.

Makari, who is a strong member of JAM’IYYATU ANSARIDDEEN (ATTIJANIYYA), further enjoined Muslim faithful to exhibit humility, tolerance and love which showed the best ways to follow prophet Muhammad as exemplified by Sheikh Ibrahim Niass.

Makari also urged the entire Muslims worldwide to imbibe religious tolerance, but refrain from going beyond the commandments of Allah.

Also speaking, Sheikh Shehu Kabore, an Imam from Burkina Faso, urged Muslims to follow the footsteps of the Holy prophet for a peaceful society.

He urged Muslims to imbibe the culture of following the Sunah of prophet Muhammad in their daily life and practices and admonished followers with wisdom and righteous utterances.

Earlier, the Chairman of the occasion, the Ohinoyi of Ebira Land, Alhaji Ado Ibrahim, the President, Kogi State Traditional Council, appreciated the Governor and Sanusi for the choice of Kogi to host the programme.

Represented by the Ohimegye-Igu of Kotonkarfe, Alhaji Abdulrasaq Isa-Koto, the Ohinoyi described the conference as an event of blessings for anybody who had chosen to partake in any of the functions and would be blessed by the Almighty Allah.

NAN reports that the highlight of the occasion was the Islamic recitations and renditions by some young Muslim scholars.

Other dignitaries at the occasion included the Ambassadors of Morroco, Palestine, and representatives of Senegal, other diplomats, traditional rulers, and dignitaries across the nation and the world.