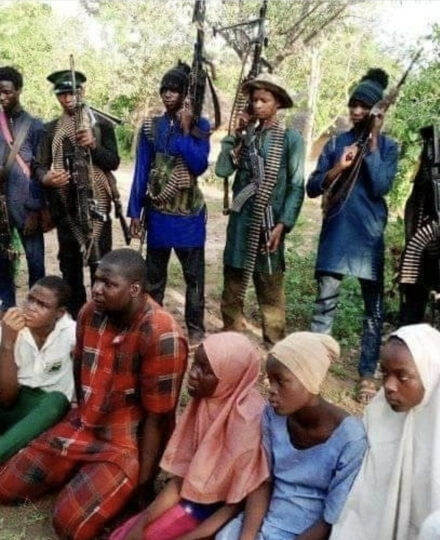 Photo showing some of the abducted students of the Federal Government College, Birnin Yauri and the gunmen who kidnapped them

The Kebbi State Government said on Saturday that 30 students and a teacher of Federal Government College (FGC), Birnin Yauri, abducted by bandits in June 2021 have regained their freedom.

Gunmen had abducted over 100 students and eight teachers from the College on Thursday, 17 June, 2021.

However, troops succeeded in rescuing some of the students days after they were abducted, while others escaped from the gunmen in the process of taking them away.

Malam Yahaya Sarki, the Special Adviser Media to Gov. Atiku Bagudu of Kebbi State, confirmed that 30 more students and a teacher of the College have also been freed by the bandits in a statement in Birnin Kebbi, the Kebbi State capital.

“They shall undergo medical screening and support while being re-united with their families.

“We thank all security agencies and those who have helped in securing the release, while congratulating Mr President, Muhammadu Buhari, for the success.”

It is not clear if ransom was paid to bandits to secure freedom for the students.