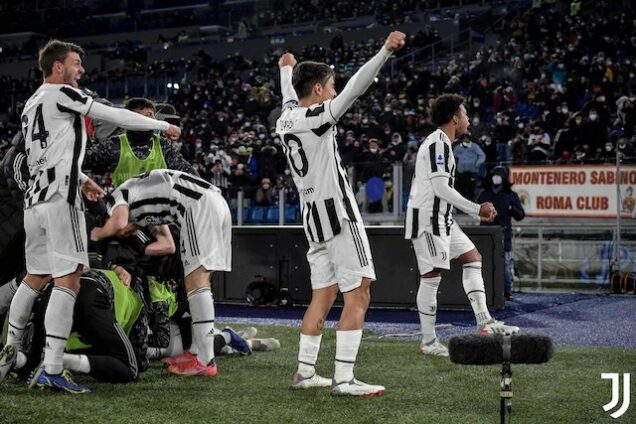 Juventus scored three goals in seven second-half minutes to complete an astonishing comeback and beat AS Roma 4-3 on Sunday.

Juve keeper Wojciech Szczesny ensured the Turin side ran away with the three points, when he saved a late penalty at the Stadio Olimpico.

Tammy Abraham put Jose Mourinho’s side in front and Paulo Dybala made it 1-1 going into the break.

On resumption in the second half, goals from Henrikh Mkhitaryan and Lorenzo Pellegrini put Roma in charge.

Juve fought back as Manuel Locatelli and Dejan Kulusevski scored within two minutes of each other, and Mattia De Sciglio fired home a fourth in the 77th minute.

“We are happy for a very important win, especially for how it came about,” De Sciglio told DAZN.

“We started the second half very badly, but our character showed at a difficult moment. But we need to see that from the start”.

Roma were awarded a penalty after Matthijs de Ligt was shown a second yellow for handball with nine minutes remaining, but Szczesny guessed the right way to save Pellegrini’s penalty in front of a stunned home crowd.

Juventus moved up to 38 points in fifth place, six points ahead of eighth-placed Roma.

“We were in complete control for 70 minutes. The team played really well, controlling the game,” Mourinho told DAZN.

“We wanted to press high up and take control of the game. It was very good for 70 minutes, then there was a psychological collapse.”