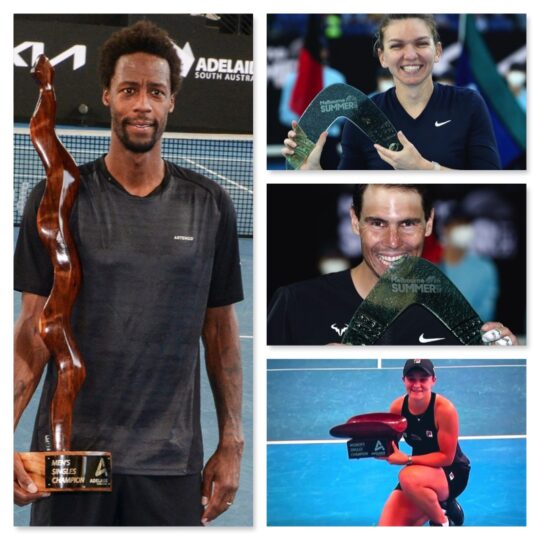 The Spaniard, playing his first competitive tournament since August, was largely untroubled as he wrapped up the win in an hour 48 minutes.

Cressy was put under serious pressure by Nadal from the off, having to defend three break points in his first service game, but there was little to separate the two for the rest of the first set, which required a tiebreak.

Nadal stepped on the gas late in the tiebreak, saving a set point at 5-6 down and then earning a set point of his own with a forehand winner, which he converted to take the first set 7-6(6).

Cressy responded by breaking first in the second set to take a 2-1 lead, but Nadal immediately shut down a potential comeback with a break of his own to bring the set back on serve.

The Spaniard then broke again to lead 5-3 and held serve to claim the title.

“I’m coming back from some challenging moments and injuries, so it means a lot to be here,” the 20-times Grand Slam champion said, before praising his opponent.

“Congratulations Maxime, it’s a great start to the season. I wish you all the very best for the rest of the season and your career.”

Kudermetova began the contest strongly, breaking Halep’s serve to take a 2-1 lead in the first set, but the two-times Grand Slam champion broke right back in the next game and then twice more to clinch the first set 6-2.

The second set unfolded in similar fashion, with Kudermetova taking the lead and Halep rallying to level the set at 2-2. Halep broke a few games later to make it 5-3 and then held to love to secure the win.

Anisimova, who took a medical timeout for treatment on her left thigh in the second set, showed great resolve to fight back from 3-0 down in the deciding set and break twice, before sealing the win with an emphatic ace.

Barty was in imperious form on Sunday as she handed Elena Rybakina a 6-3 6-2 defeat at Memorial Drive to win the Adelaide International and claim the 14th WTA title of her career.

Barty, who won the event in 2020, dominated against the 22-year-old seventh seed from Kazakhstan to win in just over an hour, as she hits form a little more than a week ahead of the start of the Australian Open in Melbourne.

“The work that I do with my team behind the scenes puts me in the best possible position to play good tennis time, and time again each and every time we’re asked,” Barty told reporters. “I certainly feel pretty good coming into the summer.

“So we take it for what comes and what it is, move on, try and do the best that we can in every opportunity, whether that’s here in Adelaide or it’s in Melbourne.”

In the men’s event, former world number six Monfils did not drop a set all week in Adelaide and the 35-year-old could not have hoped for a better buildup to the Australian Open, which starts on Jan. 17.

Monfils, who was reduced to tears when he exited the Australian Open in the first round last year, was happy with his consistency in Adelaide.

“I think I played very solid all these matches, was moving well,” he said, adding that the pandemic hit him “quite bad”.

“For me it’s a key, always to move good, then I can be more aggressive, use more my forehand, use more my serve.

“The goal is to keep all this confidence, bring into next week. Not starting tomorrow, but next week, to be ready to try to compete for big AO.”