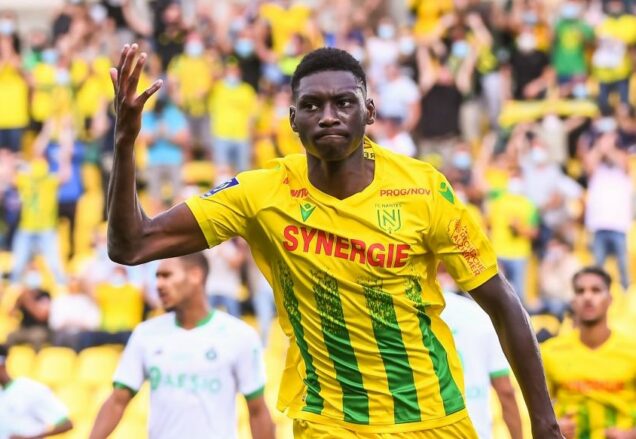 Real Madrid is interested in making a move for Nantes’ striker, Randal Kolo Muani in the summer transfer window later this year.

The 23-year-old is also a target for Premier League bigwigs Liverpool.

Kolo Muani signed for the Nantes youth setup in 2015 and rose through the ranks to make his senior debut in 2018.

The centre-forward had a loan stint away at US Boulogne in the 2019/20 campaign, following which he has been a regular in the lineup for his boyhood club.

To date, the 23-year-old has featured 65 times in all competitions, producing a tally of 17 goals and 12 assists.
Seven of his 17 strikes for Nantes have come in the ongoing campaign, according to GamblingGuy.com

While those are not exactly prolific numbers, the striker has made a solid impression with his all-round game and work ethic, helping Nantes move within three points of the top four in Ligue 1 this term.

Kolo Muani’s growth in France has not gone unnoticed as Liverpool have been linked with a move for the Frenchman recently.

Now, Real Madrid has also emerged as an admirer for the 23-year-old, who represented France at the Tokyo Olympic Games last year.

Real Madrid is plotting to sign Kylian Mbappe from Paris Saint-Germain to bolster their frontline next summer.

Apart from the PSG hitman, Carlo Ancelotti’s side also have their sights fixated on Borussia Dortmund star Erling Haaland as Florentino Perez looks to build a new Galactico strikeforce to takeover when Karim Benzema decides to hang up his boots or move on from the Santiago Bernabeu.

At the same time, though, it is important that they have reliable options as cover for their main center-forwards, something that Luka Jovic and Mariano Diaz have not been so far in their career at Real Madrid.

With Jovic’s future uncertain and Mariano being linked with an exit from the Spanish capital, Los Blancos have identified Kolo Muani to take up the backup striker’s role in the squad.

However, the Merengues will have to contend with competition from Liverpool, who are in the market for a new center-forward.

Divock Origi is expected to be on the move from Anfield soon, while Roberto Firmino is not getting any younger either.

While Diogo Jota has done a solid job operating in the No. 9 role, adding another natural striker to the roster would benefit Jurgen Klopp’s side.

To that end, Kolo Muani has emerged as a target for the Merseysiders, while the likes of AC Milan and Eintracht Frankfurt are also tracking the Frenchman.

With his contract set to run out at the end of the season, the 23-year-old could become an in-demand commodity in the summer, and it will be interesting to see if Real Madrid act to sign him up or decide to look elsewhere.