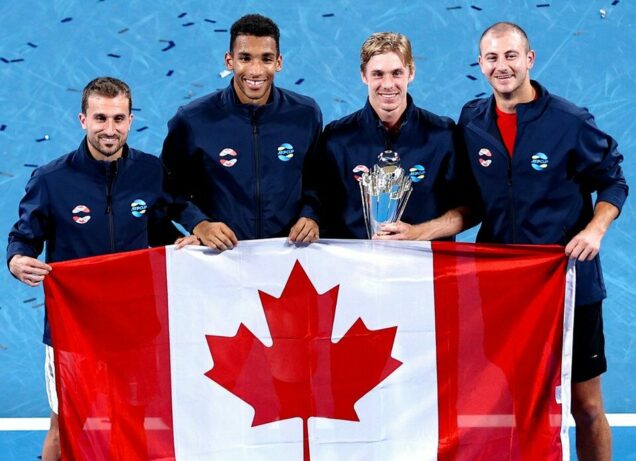 Felix Auger-Aliassime lived up to the expectation of compatriot Denis Shapovalov by beating Spain’s Roberto Bautista Agut to give Canada the ATP Cup, for the first time.

Denis Shapovalov opened the match for Canada with a 6-4, 6-3 win over Pablo Carreno Busta.

The doubles became a surplus to the victory.

Spain was a runner-up in the 2020 final, losing the final to Serbia.

“The emotions are unbelievable. There’s no better feeling than winning. We left everything out there,” said Auger-Aliassime.

“We came back from far in this competition, losing our first four matches. But we never stopped believing.

“I think that’s very important. We trust each other to the highest level … it came down to the perfect result. I’m super thrilled for everybody in the whole team and myself, of course.”

Auger-Aliassime and Shapovalov won a deciding doubles against Russia on Saturday in the semifinals to knock out the defending champions.

And with the title on the line, they played their best tennis to defeat two-time finalists Spain.

Denis Shapovalov put in an aggressive display to beat Spaniard Pablo Carreno Busta 6-4 6-3 on Sunday and put Canada just one victory away from winning the team-based ATP Cup final.

Carreno Busta came into the evening contest at the Ken Rosewall Arena in Sydney brimming with confidence, having not dropped a set all week and with a 4-1 head-to-head record against the 14th-ranked Shapovalov.

But the 22-year-old left-hander survived a barrage of breakpoint chances, including five in the opening game of the match, and held his nerve to claim victory in an hour and 38 minutes to give Canada a 1-0 lead in the tie.

“(I had) a little bit of nerves going out. Obviously I’ve got a tough record against Carreno Busta, so I knew it was going to be a tough match,” Shapovalov said.

Canada, the first team in the ATP Cup’s three-year history to have lost a tie en route to the final, were swept by the United States in their opening group tie and also lost their first match against Britain.

But Felix Auger-Aliassime and Shapovalov, who had contracted the novel coronavirus in the lead-up to the $10 million team event, bounced back with tie wins over Britain, Germany and then last year’s winners Russia.

“It’s a huge win, but we haven’t finished the job,” Shapovalov said.