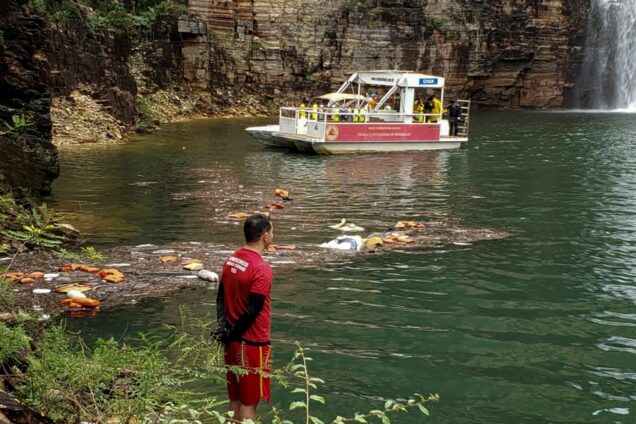 At least six people died and nine were seriously injured when a wall of rock collapsed on top of motor boats below a waterfall in southeastern Brazil on Saturday, the local fire department said.

A tower of rocks suddenly broke away from the canyon wall and came crashing down on several leisure boats, sending out a huge wave over Lake Furnas at Capitolio, in Minas Gerais state.

Videos posted on social media showed tourists shouting as the column of rock smashed into the water. At least one wrecked boat sank, others sped away.

Firemen said divers were searching for 20 people believed to be missing.

Two boats were hit directly by the rocks and 24 people rescued from them alive, fire department spokesman Pedro Aihara said.

Six bodies have been recovered, he said.

The people hurt in the accident had broken bones and one was in serious condition in hospital with head and facial injuries. Some 23 others were treated for light injuries, he said.

The region has been under heavy rainfall for two weeks, which could have loosened the rock face. On Saturday, a dike overflowed at an iron ore mine 300 kilometers to the east, cutting off a major federal highway.

Rovilson Teixeira, who has worked as a guide in the tourist area for the last six years, said he was stunned by the sight of the falling rocks.

“We are completely shocked, and nobody really knows how many victims are involved,” he told Brazilian reporters.

“There is not just one, not just two but probably many deaths. There are a lot of people with injuries. The region is full of ambulances that have come from other parts of the state to help the victims. No one is sure about the size of this tragedy.”

A spokesman for the Brazilian Navy said they are opening an investigation into the accident.

The governor of Minas Gerais state said in a statement that the accident was likely caused by heavy rains in the area that dislodged the rocks.

Authorities issued warnings for tourists to stay away from waterfalls in the area just hours before the accident.

“We are suffering the pain of a tragedy in our state due to heavy rains that provoked the accident in the Furnas lake. Rescue workers are still on the scene, ” said Minas Gerais governor Romeu Zema.

“We are in solidarity with the families at this difficult moment.”

“We have to comfort the families who are waiting for bodies to show up,” said Brazil’s President Jair Bolsonaro.

“This is something we can do with the Navy and the Fire Department in Minas Gerais”.