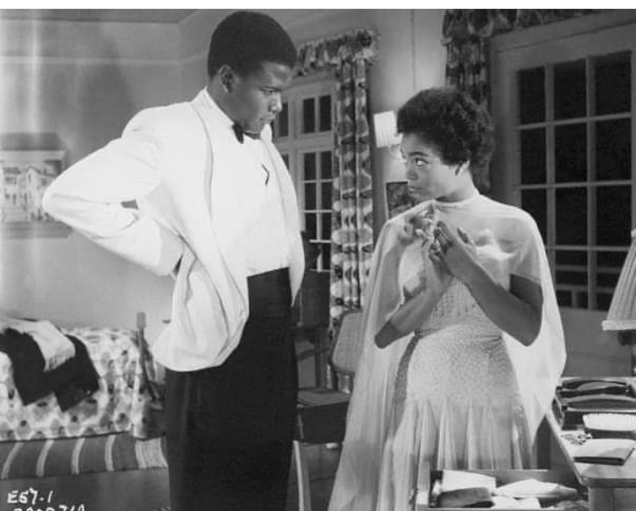 Sidney Poitier, the Black Hollywood legend who died on Thursday 6 January 2022  visited Enugu in 1957 for a movie, The Mark of the Hawk. Part of the scenes was shot in the Premier’s Lodge. For that, Dr Nnamdi Azikiwe had to vacate the house for the movie cast for a few days.

The movie, directed by Michael Audley, starred Poitier and Eartha Kitt. Since the theme had to do with the prevalent struggles of the time (nationalism), the cast had to move to Nigeria where agitation for self-governance was hot. Azikiwe, another big shot who studied in the US and gave the British imperialists a run for the cost of their helmets or rickshaws in Nigeria, was, as published in “Nigeria Nostalgia 1960-1980 project” also a perfect host in the South East.

In the movie, Sidney Poitier acts as Obam, brother of a local nationalist (Clifton Macklin) in British colonial Africa. Obam who was overseas journeys back home to help build his country. But he could only do that if he secures a political post. According to movie historians, “Domestic tensions have, however, divided the country into two hostile camps. Many natives demand the return of their ancestral lands – now farmed by European settlers. Britain and the local white administration are determined not to release their stranglehold; rather than adopting violence Obam seeks racial equality through peaceful means.”

Obam finds himself sitting on the horn of dilemma! His people are not comfortable with his intentions. Mahatma Gandhi’s Satyagraha (truth-force) style of fighting colonialism in India was still fresh at that time.

Obam, however, has a sympathizer in his spouse (Eartha Kitt) and a kindred spirit in missionary Bruce Craig (John McIntire). With their help, Obam, the newcomer to African nationalism, as another movie analyst put it, “fights to make a meaningful difference before the situation deteriorates further.”

Like great movies with powerful and historical thematic concerns, Poitier, in his lifetime, featured in many. Not a few of his best-known films, according to CNN, explored racial tensions as Americans were grappling with social changes wrought by the civil rights movement. In 1967 alone, he appeared as a Philadelphia detective fighting bigotry in small-town Mississippi in “In the Heat of the Night”. He acted also as a doctor who wins over his White fiancée’s skeptical parents in “Guess Who’s Coming to Dinner.”

The 1963 movie, “Lilies of the Field,” further shot Poitier to global stardom. It fetched him the  Oscar. In the movie, he “played an itinerant laborer who helps a group of White nuns build a chapel.”