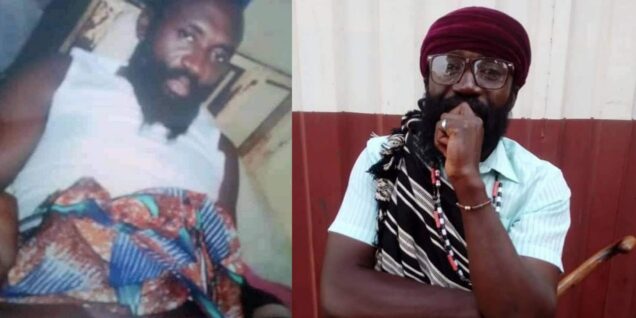 Forty-four-year-old Terhemen Anongo, who dropped out of the University of Ibadan as a 500 level medical student, recently castrated his second testicle to serve God better. He had earlier castrated the first one early last year.

When asked the day he removed the testicle, he said, “I removed it on Monday. The first one had little hitches but this one, having learnt from that experience, I did (remove) it very well. Somebody is always coming to dress it for me.

“I’m fine; there is no problem; I’m only waiting for when the wound will be healed so I can remove the stitches.”

Here are 21 facts about him:

1. He was born Terhemen Anongo in Gboko, Benue State.

3. His mother is his only surviving parent.

4. He dropped out of the University of Ibadan as a 500 level Medical student because according to him he was suffering from severe depression, which made him lose interest in medical school.

5. He tried to go back but the university authorities did not allow him.

6. He currently works as a porter, pushing wheelbarrow to earn a living.

7. His mother tried to set up a chemist shop for him. The mother got the shop for him but he didn’t have enough money to buy drugs and put in the shop. “That is what I am trying to do right now because, the wheelbarrow thing is very stressful.”

8. He once said he attempted to remove his first testicle after reading about Origen Adamantius, one of the early church leaders from Egypt, who paid to be castrated so that he would not be bothered by sexual urge.

9. It was in an attempt to do the same thing that he removed his right testicle. But there was a heavy flow of blood, so he abandoned it (castration) and rushed to the hospital.

10. But before he did that he had earlier visited three doctors because he wanted a safe procedure but they declined. That was the reason he decided to do it himself.

11. He said it was based on his medical experience in medical school that he got the confidence to carry out the surgical operation. “I got the local equipment to do it with stitches, antibiotics as well as other things. But in the process of removing the testicle, there was too much blood, so I had to terminate the surgery.”

12. He spent two weeks in the hospital, recovering.

13. He said it was never his desire to study medicine. What he wanted to study initially was Petroleum Engineering. But his dad refused on the grounds that he had some Indian teachers who told him that the best course for him to study was Medicine. “But when I got to medical school, I realised that Medicine is about cramming, memorising terminologies whose origin you don’t know. So, I lost interest in academic work but I still managed to pass and got to the teaching hospital. “

14. He tried to change his course to Psychology but the university authorities refused.

15. He lost interest in academic work. At a point he thought of suicide and almost cut off his radial artery so he could end it all.

16. Before he removed his first testicles he had thought that through fasting and prayers he could suppress his libido. But that did not work. “But it is an ongoing trouble, starving (abstaining from sex) yourself is not easy; you get some energy to overcome and then some women around here (in Gboko) are almost walking naked, you know what I mean. So, I said to myself “Why not take away the ‘petrol tank’?”

18. After the first testicles was removed, he said he still had plans to marry but there was no money. “If I had money, I would have married. If I find a woman who is ready (to marry me) despite the loss of one testicle, why not?”

20. He once said that his depression was not the reason he removed his testicles. But in order to devote himself to Christian values. “It was not from the perspective of mental problem but to devote myself to Christian values and I am not the first person to do that; that was why I made reference to Origen, the father of theology, the greatest theologian the Church has ever produced. But in the secular world, it is very easy for people to always look at people who do things out of their religious beliefs with suspicion.”

21. He said he would advise people to get medical attention and, most importantly, to draw closer to God, whether they are Christian or Moslem. And they should have people around them to encourage them. “I think they should also get married for those who are supposed to be married. Depression is prevalent among unmarried people. They need to get married because they need someone to cheer them up and encourage them with good meals and good love making.”

Credit: These facts were sourced from an interview Terhemen had earlier granted.