ASP Joseph Okoh, 12 others rescued from kidnappers in Edo 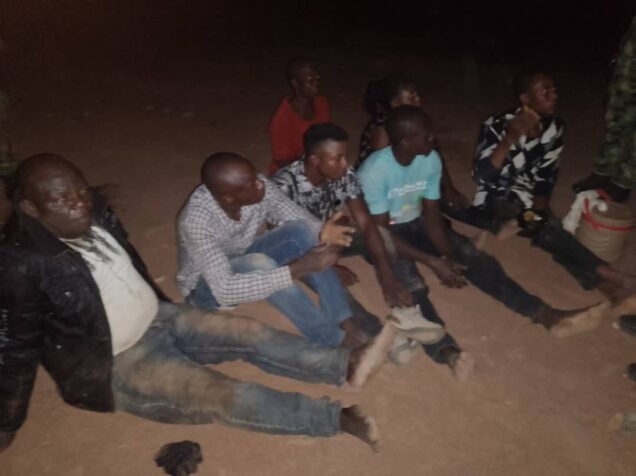 An Assistant Superintendent of Police, ASP Joseph Okoh and 12 other people abducted by suspected kidnappers in two separate operations in Edo State have been rescued by the Police.

In the first incident which occurred at about 9.11 pm, on 9 January, 2022, the police officer, ASP Joseph Okoh and six other passengers were traveling along the Benin-Ekpoma road when they were accosted by armed hoodlums suspected to be kidnappers, at Okwo Ogbemudia Farm.

The hoodlums reportedly shot sporadically on vehicles plying the highway, during which some passengers were kidnapped by the hoodlums.

A statement from the office of the Command’s spokesman, SP Kontongs Bello, stated that the DPO of Ehor Division, CSP Benefa Benjamin, immediately led a team of operatives and local vigilante and hunters to the scene and embarked on bush combing operation.

Kontongs added that the driver of a Passat GL vehicle with Reg. No. BEN 628 MS which veered off the road and ran into a palm tree, sustained bullet wound on his head and thigh and unconscious, while one other female passenger identified as Awoma Jerry (28), also have injury on her knee and thigh.

They were immediately rushed to a nearby hospital for medical attention by the operatives.

“On receipt of the information the Divisional Police Officer (DPO), Ehor Division, CSP Benefa Benjamin, immediately mobilized his team of police operative and the military at Ehor, to the scene.

“Further bush combing was carried out along the power line axis and at about 2308hrs the armed hoodlums were sighted crossing with some victims, on sighting the team of operatives the hoodlums engage them in gun duel, but the superior fire power of the team of operatives over powered them which led to the rescue of seven (five male and two female) victims unhurt,” the statement added.

One of the kidnappers was neutralized by the operatives.

Names of the rescued victims were given as Lucky Ebuade, Flora Ebude, ASP Joseph Okoh, Tina Okiti, Adamu Danusa, Hassan Mohammed, and Tolba Masamavi and have since been profiled and asked to continue on their journey.

In the second incident which occured on 1 January, 2022, 10 persons who were conveying a corpse in a Toyota Hiace Bus with Reg. No. AB 14 TR, from Taraba State to Iruekpen in the State for burial, were waylaid by hoodlums and kidnapped along Igueben-Opoji Road at about 12.45 am.

On receipt of the information, the Divisional Police Officer of Ekpoma Division, CSP Bukoye Oyegbemi, immediately mobilized a team of police operatives, local vigilante and hunters to the scene and embarked on bush combing operation.

Six victims were rescued unhurt in the process, while efforts is still ongoing to rescue the remaining four victims and further arrest the suspected kidnappers.

Meanwhile, the State Commissioner of Police, CP Philip Aliyu Ogbadu, has thanked the general public for cooperating with the police by way of providing prompt and credible information on the activities of criminal elements in the state.

He reinstated the Command’s commitment for more roburst patrol across the State, especially on the highways.