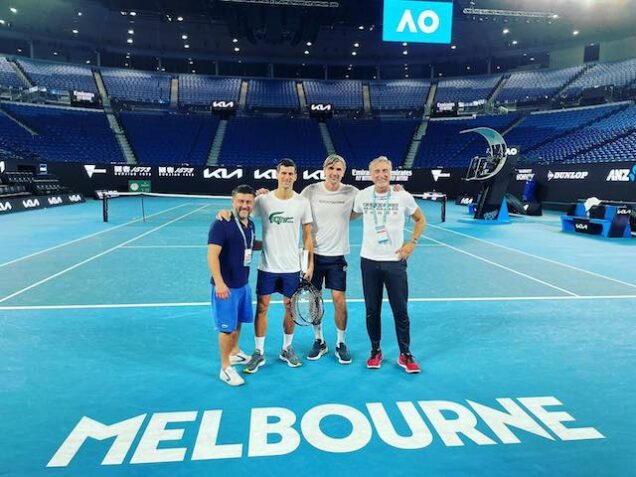 Djokovic, second left with his team in Melbourne

Novak Djokovic has broken his silence after his Australian visa triumph to thank all those who stood by him as he fought in court.

The tennis icon posted a photo of his at the practice court of Melbourne, getting ready for the Australiqn Open on 17 January.

He spared some moments for his over 10 million fans and appreciated all those who stood by him as he battled to upturn his visa cancellation.

“I am pleased and grateful that the Judge overturned my visa cancellation. Despite all that has happened in the past week, I want to stay and to try to compete at the Australian Open.

“I remain focused on that. I flew here to play at one of the most important events we have in front of the amazing fans.

“For now I cannot say more but THANK YOU for standing with me through all this and encouraging me to stay strong”, Djokovic wrote on Facebook.

Djokovic, who is the defending champion and record holder of nine titles arrival Australia on Wednesday night, only to be met by the iron curtain of the Australian Border Force.

His visa he was told, was a wrong one. He was also told he should not have been granted a COVID-19 vaccine exemption.

The Australian government then went on to cancel the visa.

Djokovic decided to battle it out and get the visa validated.

He won the appeal on Monday.