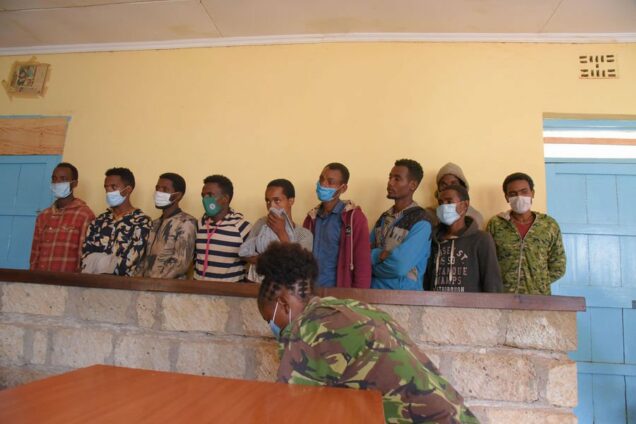 Ethiopians arrested in Kenya in 2020

Kenyan police said they are holding 91 Ethiopians without valid identification documents and who may be victims of traffickers.

The Ethiopians were arrested in a house in Kitengela, about 30 km east of the capital, Nairobi.

The Detectives from the Directorate of Criminal Investigations (DCI) said in a statement issued on Sunday evening that 91 aliens including 44 juveniles were smuggled into the country from neighbouring countries and taken to the location onboard a truck.

The DCI said the illegal immigrants were being held temporarily as the smugglers sought means to send them to another country.

“A scrupulous crackdown on illegal immigrants believed to have been smuggled into the country from neighbouring countries has this (Sunday) evening seen the arrest of 91 Ethiopian nationals at a house within Milimani area of Kitengela, Kajiado County,” the DCI said.

The detectives said they have launched investigations into the recent influx of immigrants with the aim of paralyzing likely human trafficking activities and arresting the perpetrators.