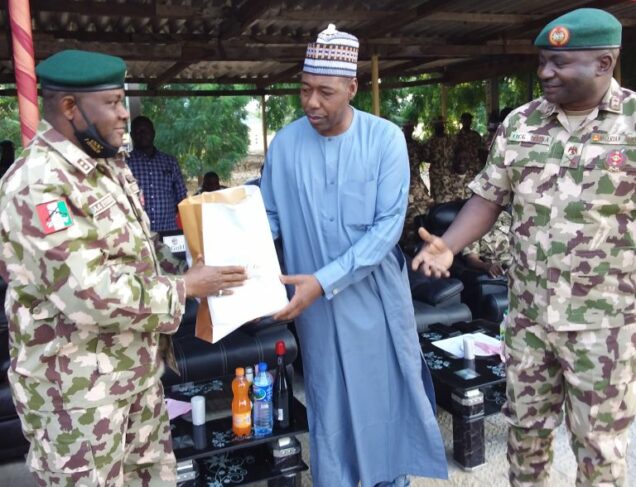 Gov. Babagana Zulum of Borno has advocated for improved salary and welfare for the military personnel to boost their morale.

Zulum made the call on Sunday in Maiduguri at a feast to celebrate the Acting General Officer Commanding (GOC) 7 Division, Maj.-Gen. Abdulwahab Eyitayo, who was recently promoted to the rank.

Zulum argued that military personnel had made lots of sacrifices under harsh conditions and paid the supreme price to secure the nation, adding that they need to be rewarded accordingly.

He congratulated Eyitayo and other elevated officers, saying that the government and people of the state were excited over the development.

The governor reiterated commitment of his administration to support the military to enable it to succeed in the fight against insurgency.

Zulum described the relative peace recorded in the state as a welcome development, adding that it facilitated resettlement of displaced persons in the liberated communities.

He also announced plans to re-open the commercially viable Maiduguri – Gamboru – Ngala road and Maiduguri – Damboa road in January, to fast track normalisation of activities in the state.

“Today; I am happy as the Governor of Borno because we have achieved a lot.

“We are able to return people to Baga, Wulgo, Ngoshe and many communities in the state.

“By the grace of God, we shall soon resettle people back to Malumfatori, headquarters of Abadam Local Government Area.

“The only way we can fight insurgency is for us to continue to be resilient,” he said.

In their separate remarks, Eyitayo and Maj.-Gen. Christopher Musa, Theatre Commander, Operation Hadin Kai (OPHK), restated commitment of the military to end insurgency in the country.

While commending the support of the government and people of the state in the counter insurgency operation, they urged remnants of the terrorists to emulate those that surrendered before it’s too late.