Delivery companies groan over clampdown on motorbikes in Rivers 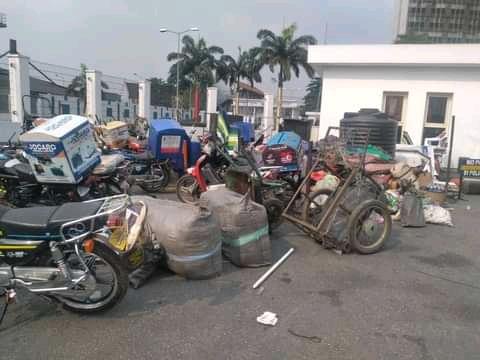 Some of Bikes impounded by the Rivers State Taskforce on illegal Street Trading.

Logistics companies in Rivers are groaning over clampdown on their dispatch riders by the State Taskforce on illegal street trading.

Acting on the orders of Governor Nyesom Wike, the Task force has in the past few days intensified clampdown on street traders, commercial motorcyclists, traders selling under umbrellas and so on.

Investigation shows that among those worse hit by the clampdown were logistic companies who rely on motorbikes for delivery of goods and services to their customers in Rivers State.

Our Correspondent gathered that barely 24 hours after the ban on the use of motorcycles by Governor Wike in a statewide broadcast, the Tas kforce on illegal Street Trading started clampdown on motorbikers, including those being used by private delivery companies.

One of those who rely on the delivery companies lamented that she had to use a friend’s car to move her products from one delivery point to another to meet the demand of her customers.

“Businesses in Port Harcourt are really suffering because of this ban. Many deals are being put on hold
Let’s pray and hope that Governor Wike addresses this issue again. Over 98 percent of logistics companies in Port Harcourt have all these legitimate documents that are needed to carry out full operation… So what is the way forward?”

Governor Wike had earlier directed that Logistics companies using motorbikes have register with the state government for proper documentation for security reasons.