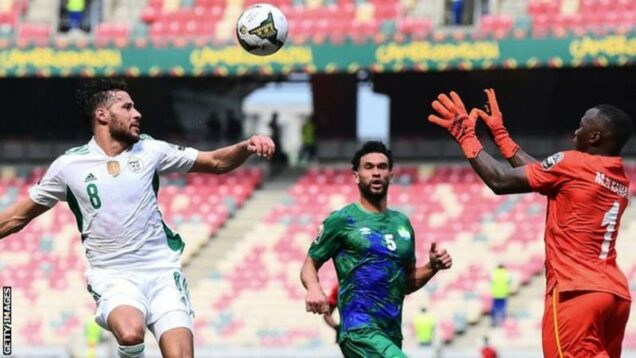 Algeria began the defence of their AFCON title in Cameroon on a shaky note on Tuesday as they were held by minor Sierra Leone to a goalless draw.

The Desert Warriors have been in great form and are favourite to retain their title, but they could not bite against a resilient Leone stars of Sierra Leone.

Islam Slimani had on four minutes came within inches of scoring after picking up a pass from Riyad Mahrez, but his shot from inside the box flashed inches wide off the right post.

Alhaji Kamara came close to scoring for Sierra Leone on six minutes after picking up the ball in space and from inside the penalty area sent a shot inches wide off the right post.

Seven minutes into the second half, Yacine Brahimi latched on to a precise pass and found himself one-on-one with the keeper, but his effort was straight at Mohamed Kamara, who was alert and made an easy save to deny him.

On 67th minute, Sofiane Bendebka was the first to arrive to a rebound inside the penalty area and unleashed a quick strike towards the bottom right corner that beats the keeper. One of the defenders, however, made a goal-line clearance.

Two minutes later, Riyad Mahrez got to the rebound outside the penalty box and unleashed a long-range shot towards the bottom right corner, but Mohamed Kamara made a decent save to stop the effort.

As time wears on, Mahrez connected with a cross on the edge of the box, controlled the ball and pulled the trigger. Kamara made a beautiful save to deny his effort which would have ended in the bottom right corner.

On added time, Ramy Bensebaini swept past a couple of defenders inside the box and tried to score in the left side of the goal, but great anticipation by Kamara allowed him to make a comfortable save.