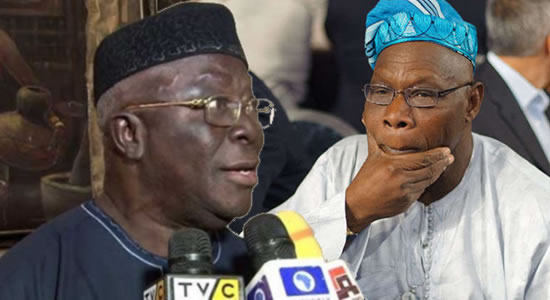 Afenifere leader, Pa Ayo Adebanjo has attacked former President, Chief Olusegun Obasanjo for saying the resources in the Niger Delta did not belong to the people but Nigeria.

He described Obasanjo’s statement as provocative and catalyst to Nigeria break up, saying that Niger Delta resources did not belong to Nigeria.

Obasanjo had recently said that oil in the Niger Delta belonged to Nigeria and attempts by Chief Edwin Clark to put the record straight was rebuffed by a statement by the Arewa Consultative Forum (ACF) supporting the position of the former president.

Adebanjo, who spoke at a news conference on Wednesday in Lagos, faulted the former president, citing the 1960 and 1963 constitutions which touched on the revenue allocation.

He said that the 1963 Constitution allowed for payment of 50 percent in Section 140, to the region where the revenue was derived, as it was a two tier Federal system with the state government being coordinate and not subordinate to the Federal Government.

He said “This was the peaceful coexistence position of the unity of the ethnic groups until 1966 when the military took over government and abrogated the constitution agreed to by our founding fathers and set up the present 1999 Constitution. The obnoxious provisions of this constitution have been the cause of instability in the country.”

Adebanjo stated that he initially thought the former president was misquoted until he went to read his full statement, saying he was shocked and disappointed that Obasanjo was quoting profusely from the military imposed constitution on the country, which he said had been described as fraudulent and rejected since its introduction.

He said a united Nigeria did not exist from Obasanjo’s own perspective and understanding only, saying that Nigeria has existed before Obasanjo became the president of the country with the founding fathers with equally great passion if not greater passion for a united Nigeria.

He recalled that the nation’s Colonial masters brought the various ethnic nationalities together through various constitutional reforms under a unitary form of government from 1914 to 1950, until it was abrogated and a federal constitution coming in force in 1954.

Adebanjo argued that it was the obnoxious provisions of the 1999 Constitution handed over by the military after returning to the barracks that had been the cause of instability in Nigeria.

He asked: “When General Obasanjo asserts that the Niger Delta Resources is not owned by Niger Delta but Nigeria, is the General suggesting that God created the resources in Niger Delta when Nigeria came into existence in 1914, or it was there before the amalgamation?”